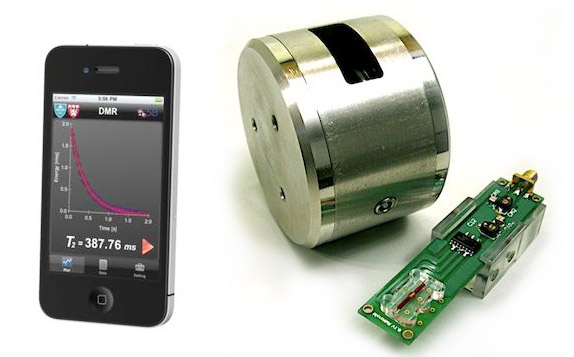 It can be the longest and most agonizing three days of a person’s life: You’ve found a suspicious lump, the doctor’s taken samples…

And now you wait, unsure of whether or not you have cancer.

To make matters worse, when that call finally does come from the pathology lab and you expect your results – positive or negative. Anything. Just some closure and a word to start making plans. But instead of results, the pathologist tells you the tests are inconclusive and you’ll have to start the whole testing and waiting process again.

This scenario may soon be a thing of the past thanks to Dr. Ralph Weissleder and his colleagues at the Massachusetts General Hospital in Boston. The researchers have developed a miniaturized Nuclear Magnetic Resonance scanner, or micro-NMR, which works with a smartphone to effectively increase both the speed and accuracy of tumor diagnoses.

Capable of diagnosing a tumor in less than an hour with more than 96 per cent accuracy, the system is a huge improvement over the pathology process’ 74-84 per cent accuracy rate. Now, the doctor can take tiny samples from several areas of a lump using a fine needle, label the samples with magnetic nanoparticles and inject the concoction into the scanner. Inside, the NMR identifies different molecules and cancer-related proteins by the way they react to magnetic fields and the magnetic nanoparticles.

The doctor then connects the scanner to a smartphone, loads the accompanying app and analyzes the nine protein markers in the test results to produce a diagnosis.

After two rounds of field tests with 50 patients the first time and 20 the second, the entire procedure – test and analysis – took less than an hour on average, and produced accurate results in 96 and 100 per cent of patients, respectively. Weissleder credits much of the accuracy to being able to sample several sites in each tumor.

The micro-NMR may eventually be used to test whether or not cancer patients are responding to drugs during treatment, wrote the team in the journal Science Translational Medicine.