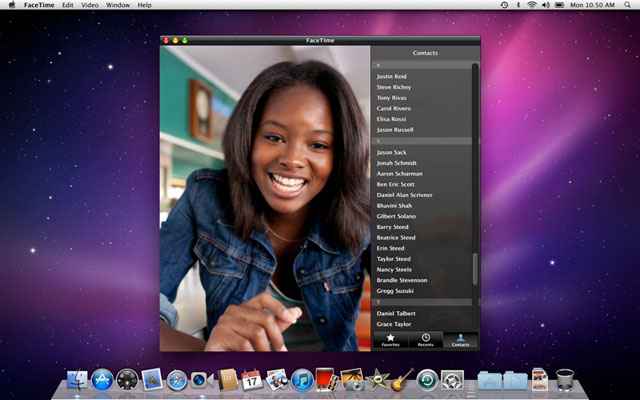 Along with the revamped MacBook Pro line of computers today, Apple has released the first full-version FaceTime app for the Mac App store.

The app comes as an update to the Beta version for Mac computers released last October, which allowed users to place video calls to other Mac computers, iPhone 4s and fourth-gen iPod Touches. Now, thanks to HD webcams built into the new MacBook Pro computers, FaceTime will also support 720p HD video calls.

FaceTime’s setup will remain the same as in the Beta version, using an Apple ID and any number of other email addresses as the computer’s “phone number.” When receiving a call, every running Mac and iDevice signed into an Apple ID ring simultaneously even if the FaceTime program isn’t open.

Despite the fact that the app comes pre-installed on the new MacBook Pros, it’ll cost everyone else 99¢ in the Mac App store.

Skype is still standing as fierce competition to FaceTime. It allows video calls over 3G; FaceTime needs WiFi. Now there’s Fring in the mix, too.

Why not allow video calls between any and all of these programs? An Android phone can make a phone call to an iPhone. Skype VoIP can phone a landline and vice versa. Hell, you can email any other email address from any email address hosted by any company – Gmail on an iMac to Hotmail on an Android tablet forwarded to Yahoo Mail on a Windows Phone 7. You can chat through MSN to those on Yahoo Messenger and sign into iChat with an AOL account.

Why is it that video calling has to have these limitations? If video calling is truly the communications medium of the future as the Jetsons so famously prophesied, this needs to be addressed. You should be able to sit at your shiny new MacBook Pro and videocall through FaceTime to anyone using Fring on their Galaxy Tab, MSN Messenger on their PC or Skype on their smartphone over 3G.