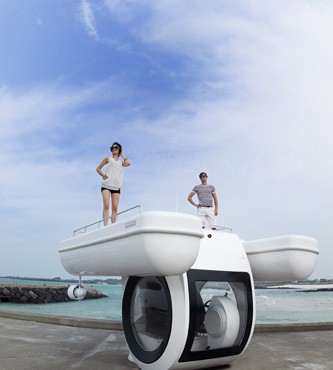 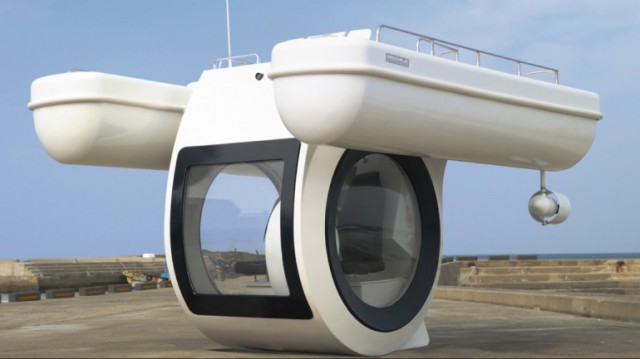 2011 seems to be not only the year of the tablet, but the year of the new novelty beach-side resort vehicles, too. First we saw the introduction of the water-powered jetpack that gives ocean-goers a bit of a look down to the surface of the ocean. Now, Korea’s Raonhaje is following up with the EGO electric semi-submarine for resorts for a view of what lies below.

Less a submarine than a two-seater pontoon with a submerged fish-bowl cabin, the EGO doesn’t dive and needs no special training to operate. In fact, it’s driven like a car, with a foot pedal throttle rather than the traditional hand lever. The cabin is entered via a trapdoor and ladder between the two fishing/sunbathing decks, and contains the controls and seats between acrylic windows 200 times stronger than glass.

The unit isn’t airtight like regular submarines, says Raonhaje, meaning “you can escape from the boat very fast and easy in emergency situation.” This is the EGO’s biggest advantage over regular submarines, they add. Plus, you’ll never run out of oxygen.

The seats are far enough below the surface to offer a truly immersive view and experience of marine life, with a battery capable of eight hours at cruising speed. Rushing around at its top speed of 5.7 mph (9.2 km/h), you’ll run out of juice in only four hours, leading to a six- to nine-hour wait for a full recharge.

Perhaps the biggest drawback of the EGO is its lack of anti-fouling paint on the exterior, meaning the semi-sub needs to be hauled out of the water once per week for cleaning.

The vessel’s cabin comes complete with LCD screens for a view of the surface when docking, a depth sounder for shallow area warnings and a VHF marine radio.

Raonhaje offers bulk discounts for EGO semi-submarines, available in seven colours with a shipping time of three to four months.