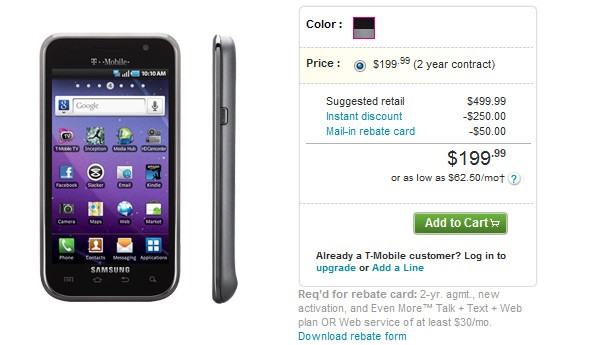 If you have been sitting on the fence about getting an Android phone from T-Mobile and are hell bent on getting said Android phone in the Samsung form rather than any other. And especially if you absolutely must have 4G — even if it’s not really 4G — there’s the Samsung Galaxy S 4G.

The phone has officially made its way onto the shelves at T-Mobile, but it’s not really all that different from the T-Mobile Vibrant that it is effectively replacing. I imagine the Vibrant will be sold side-by-side with the Galaxy S 4G for now, but it’s got to be on the way out.

After all, they’re both Galaxy S phones with pretty much the same kind of look and feel. Granted, the 4G edition comes with HSPA+ connectivity and a front-facing camera, but that’s really it. I guess the extra speed might come in handy for some media streaming, but if you’ve already got a Vibrant, this upgrade might not be as worthwhile.

If you feel so inclined, the Froyo-powered T-Mobile Samsung Galaxy S 4G is selling for a cool $199.99 on contract, just like its 3G-equipped predecessor several months ago.