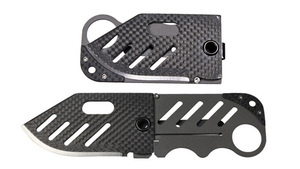 Want to be discreet with your cutting ways while looking totally awesome when you actually whip out the blade? Well, this folding credit card knife might be just the ticket.

Yes, it’s obviously not the only credit card knife on the market, but this one is made with carbon fiber. That has to make it faster or something, right? At the very least, it makes it look pretty cool.

Dubbed the Creditor, this carbon fiber knife folds up into credit card form when not in use. Carbon fiber on its own might not be sharp enough and that’s why there’s some D2 tool steel and titanium backing it up. That’s why it’s a cool $200 compared to the $25 bargain model we saw late last year.

Either way, I imagine that the TSA won’t like you trying to smuggle this on board your flight to JFK.