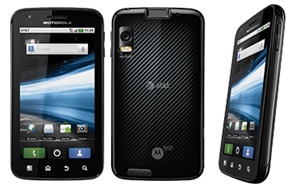 We thought that saving fifty bucks was already pretty good, but it looks like the Motorola Atrix 4G is already receiving yet another price cut from yet another retailer. If you want the absolute best deal on the hot new Android phone, it looks like you want to turn to Walmart.

Instead of paying the full $199.99 contract price via AT&T, you can mosey on over to the monstrosity of a megastore to find the exact same phoen for $129.99. If you can’t figure it out from some quick math, that’s a cool $70, giving you plenty of extra coin to splurge on the overpriced laptop dock or multimedia dock.

The down side in this? Oddly enough, Walmart is not going to carry the Laptop Dock accessory nor is it to going to sell the Multimedia dock, at least for now. So, while you can score a pretty great deal on a hot and powerful Android phone from Moto through them, you’ll need to drive to the other mall to get your accessories on… but at least you’ll have an extra seventy bucks to make that drive.

Let’s just hope that the Atrix 4G is really 4G, unlike h