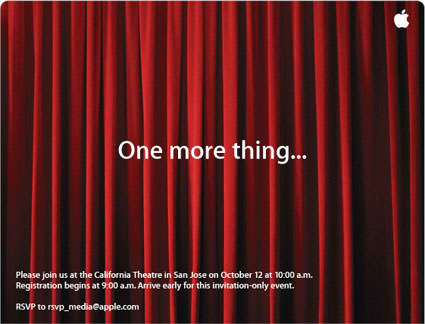 The original Apple iPad wasn’t the first tablet device on the market, but it sure did popularize the format. This is not unlike what the iPod and iPhone did for the mp3 player and smartphone. So, what will the next-generation iPad 2 bring to the table to combat the rise of the Gingerbread men – the Android tablet? We’ll find out in about a week and a half.

It has been confirmed that Apple is hosting a special event on March 2. It is always at these so-called special events that the Cupertino iCompany reveals its latest goods. As always, nothing has been confirmed about the iPad 2’s specs, but we can probably expect an improved display, a camera or two, and possibly dual-mode cellular connectivity.

Then again, they could be “changing things all over again” with the iPad 2 in some way that no one expected. I somehow doubt a 3D display is in the cards. I do expect, though, for prices to hold steady with the current gen, only with some upgraded specs and features.

The March 2 event could see the revealing of the new Sandy Bridge MacBook Pros as well. Jobs probably won’t be there for the unveiling, but who knows. Unless the “one more thing” is a holographic avatar of Steve Jobs powered by Watson?

[via All Things D]