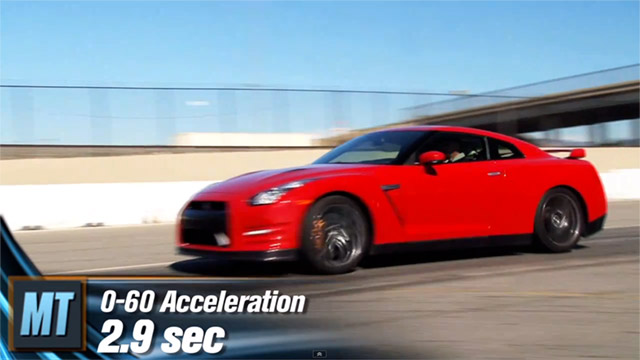 I was pretty stoked when I first saw the R35 Nissan GT-R. The Skyline moniker carries with it a lot of tradition and it looks like the newest Godzilla just got itself a sizable upgrade. The 2012 Nissan GT-R may not look all the different from the one introduced a few years ago, but this is even more of a beast than before.

Granted, I have never driven any Skyline, but I know about its reputation and I respect that. For 2012, Nissan is tossing in an even more powerful engine at still the relatively cheap supercar-killing price range. You get a 3.8L twin-turbo V6 good for 45 more horsepower than its predecessor. I hear that it’s able to run the quarter mile in 11.1 seconds bone stock. Run some more boost, add some bolt-ons, and you’re easily in the 10s, if not the 9s.

Motor Trend’s brief video review also highlights the return of launch control. Want to hit the drag strip? R-Mode Start Function is what you want. Do that and you’ve got a 2.9 second 0-60mph time. That beats the outgoing version by half a second. Is it refined? Maybe, maybe not. Is it one hot car that’ll wipe the pants off cars twice its price? Absolutely.