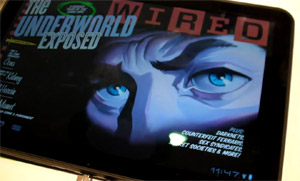 Rupert Murdoch decided that one way to save his print business was to launch The Daily exclusively though the iPad. Well, he’s obviously not the only one with an e-magazine. Wired was exclusive to the iPad but they have now gone and released an Android version too.  Presumably because readers of Wired Mag might be a little geekier and tech-savvy, on average, than iPad readers, and Android is growing quite fast and is a worthwhile target.  As you can see through the walkthrough video below, the Wired folks have done a pretty decent job at adapting the print magazine into a digital format.

You get some interactive elements, like hitting little on-screen highlight points to get more in-depth captions. They also allow for “multi-layer” elements, like having the ability to cycle through images within the same digital space on the digital page. This isn’t all that new for an online magazine, but it adapts quite well to the tablet format.

The trouble, of course, is whether people will continue to pay for these kinds of monthly periodicals when reading sites like Mobile Magazine are free and updated multiple times a day.