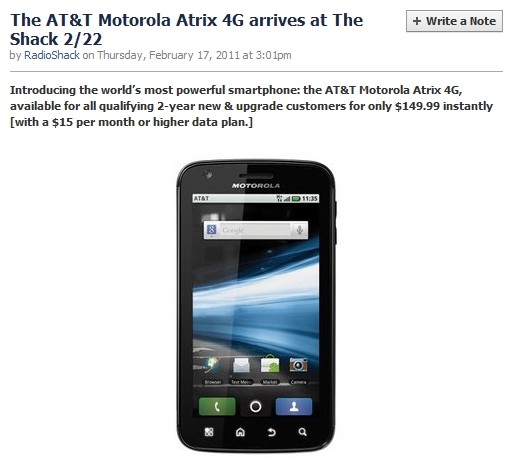 Well, that didn’t take very long at all. The Motorola Atrix 4G hasn’t even officially hit store shelves yet and it has already experienced a 25% price cut. Granted, the price cut isn’t an official one being offered through AT&T and Motorola, but it’s the next best thing.

Instead of paying the full $200 asking price through Big Blue directly, you can mosey on over to Radio Shack to get it for $149.99 on the same two-year contract. It’s not like you have to wait any longer either, since the Shack is going to start selling the Android device on the same February 22 launch day as AT&T corporate stores.

But wait. There’s more. You know that Atrix 4G laptop dock that really makes it an entirely different beast than other Android smartphones like it? Radio Shack is discounting that too. Snatch it up on a contract bundled with the phone and they’ll let it go for $329.99. That’s twenty bucks less than AT&T, bringing your total bill up to $479.98 before taxes.