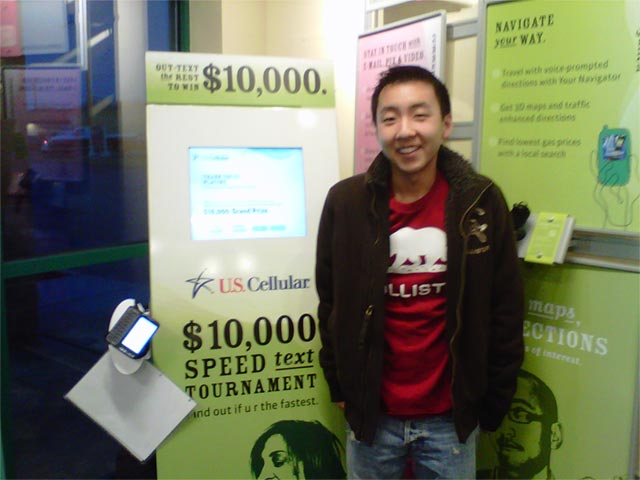 U.S. Cellular has announced the five winners from its 2010 Speed Text Tournament, which travelled around the United States throughout the year to pit competitive text-writers against one another by timing their speed while typing random phrases. And at the top of that list is Zhang, who managed to accurately type the given 26 characters in 1.5 seconds.

When considering the recent Nielson survey that found text messaging to be the preferred method of mobile communication in the U.S., it’s not hard to see where the contest came from or how people have had so much practice. According to the survey, texting has officially eclipsed voice calls in the U.S., with Americans sending and receiving more text messages than the number of voice minutes they use each month.

But it wasn’t a first-attempt deal, says Zhang, who has only been texting for a year and a half, using T9 on an LG Vu.

“I heard about the contest first in late July, when my mom read a newspaper article about it in the Tri-City Herald,” Zhang said in an interview with Mobile Magazine. “She encouraged me to go because it was during the summer and I didn’t have much to do, and she knew I was already a fast texter. I went to compete that first day and stayed at the store for over three hours, finally getting used to the phone. When I left, my score was high enough to be third in the nation.”

Two days later, he says, he returned and managed to bump that score up to second place before the competition moved on. But after checking the U.S. Cellular website, he found the contest was heading to Ellensburg for its last stop in Washington state and made the trip out with his mom to take first place before the contest moved on again. 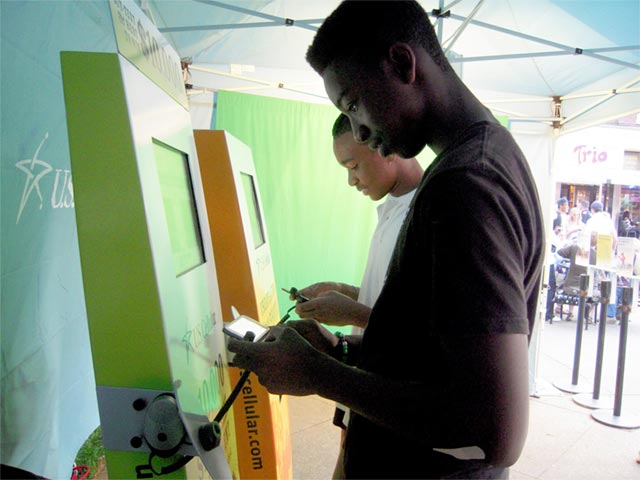 Unwilling to lose that fleeting taste of victory, Zhang met the contest in Kennewick, Wash. and Hermiston in Oregon before taking back the lead.

“I continued to go to other cities where the competition was taking place, and managed to improve my score again in Yakima, Washington, achieving just under 863,000,” says Zhang. “I was in first place but continued to go just because I was afraid I was going to be bumped down again – after all, $10,000 is pretty big compared to the second place prize, $500.”

“I did not really prepare much for it because my phone is so different from the one I had to use in the competition. I just showed up and started texting.”

He credits his texting speed to 11 years worth of piano skills.

“In piano, to play something you have to start out practicing the phrase very slowly, and increase the speed after practice. I applied the same technique to texting; I started texting the given phrase very slow and slowly increased the speed until I was doing it as fast as I could.”

He plans to put the $10,000 winnings towards post-secondary, with aspirations of something science-related or in the medical field.

“It was fun for our associates to meet the thousands of people who participated in the $10,000 Speed Text Tournament across the country,” wrote Shelly Pluta, director of customer experience marketing for U.S. Cellular, in the announcement. “The competition was fierce, and we’re excited for all of the winners whose love for texting has paid off.”

What about the other contestants? Sheridan Schuessler of Slater, Iowa; Jamie Civitate of Des Moines, Iowa; Michaela Smith of Locust Grove, Oklahoma and Gabrielle Knapp of Maryville, Tennessee received $500 gift certificates from U.S. Cellular for their superior texting abilities.

Perhaps Zhang will go on to beat the World Record set by Frode Ness in November 2010?  He completed a 160-character text message in 34.65 seconds at the the Norwegian SMS championship in Oslo, Østlandet, Norway.  Previously this was held by  Melissa Thompson, who typed the phrase below in just 25.94 seconds.

“the razor-toothed piranhas of the genera Serrasalmus and Pygocentrus are the most ferocious freshwater fish in the world. In reality they seldom attack a human”

How fast are you?  Try the phrase above on you’re mobile phone and let us know. Here’s a couple apps that can measure your texting speed if you’re clock isn’t quick enough.