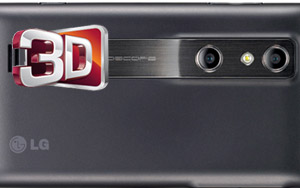 Looks like Samsung hasn’t quite developed a case of “me too” just yet. In fact, it’s doing the complete opposite, saying that it hasn’t “seen a need for 3D on mobiles as of yet.” Clearly, this is a shot aimed directly at their neighbors at LG.

After all, the LG Optimus 3D is the only phone announced thus far that is going to sport a 3D display. Samsung is quick to point out that they “are world leaders in 3D,” but they “don’t see [3D] is needed yet” given the trade off “when it comes to thickness and pocketability.”

TechRadar reports Samsung Mobile UK product management head Jim Powell did give the company a way out though, saying that if the innovation works (and the public seems interested), Samsung will offer a “response” quickly. For now, I’m inclined to agree with Samsung. As innovative and novel as the idea may be (the only other glasses-free 3D handheld that I can think of is the Nintendo 3DS), I think it’s just that: a novelty.

Then again, they did say the same thing about the waggle-tastic controls on the Wii when that was first revealed too. Look at where we are with motion gaming now.