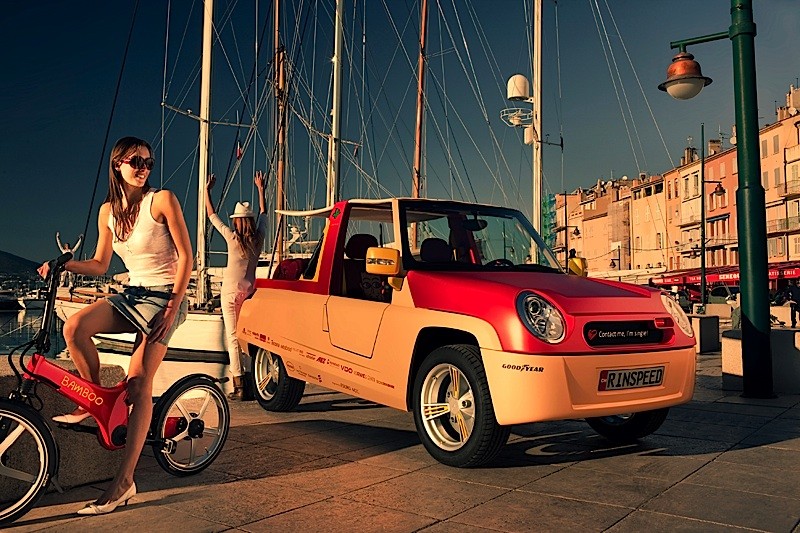 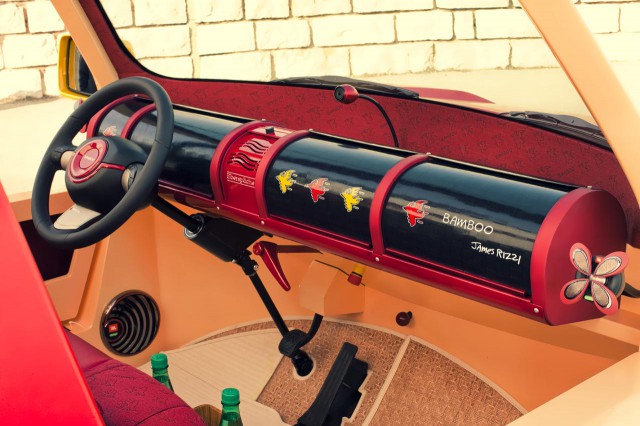 The Rinspeed BamBoo isn’t your average electric concept car. It wasn’t built “from the ground up” to be a car that runs on electricity. It isn’t a commuter retrofit of an existing ICE car. And it isn’t there to dazzle with its superior horsepower.

No, the BamBoo was designed with the intention of being a fun, sun and sand delight for the social-media types and tech-savvy beach lovers. From its bread-box dashboard compartments to the throw-switch controls it conceals, it gives oldschool stylings and concepts a place in the world of high-tech transport. But with a Siemens VDO display and HTC Flyer tablet dock in the other roll-lid compartments in front of the passenger, flower-shaped JBL GreenEdge speakers and a webcam on popping up from the dash, there’s a certain sense of balance where the old and the new meet. 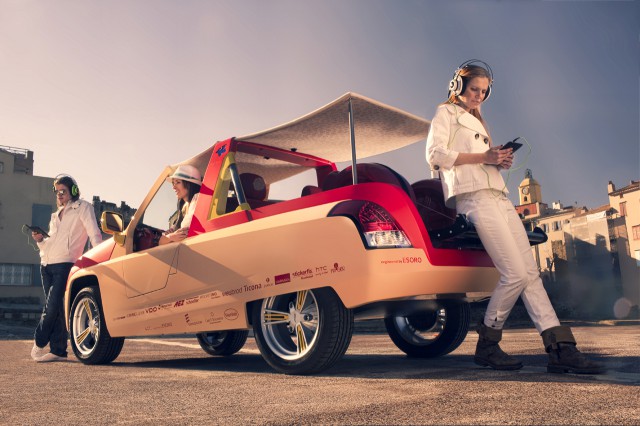 It may be the first car with social media integrated into the auto itself. The radiator grill has been replaced with an internet-connected “Identiface” screen for broadcasting messages, news and even your Facebook page to all. On the side of the car’s roll bar is a Rizzi bird, which you can set to change colours depending on your mood and message: Green=I’m single, Blue=I’m in a party mood, etc – though, the system may have a bit of a learning curve before everyone around you catches on to your intentions when you colour-flip them the bird. Plus, the BamBoo has its own online community accessible through a tablet/smartphone app.

As for the body itself, the car sits somewhere between an El Camino and a golf cart. It has an inflatable roof that doubles as a beach towel. The back seats – also inflatable – are removable and double as beach chairs.

Here’s an excerpt from Rinspeed’s announcement:

Anyone who might think that this is simple retro design underestimates the boss of the Swiss concept powerhouse. He reinterprets the automotive references of days gone by and evolves them into the future. He plays with man’s yearning to get back to the roots, often paired with the desire to be in harmony with creation. That makes electric drive, also for the onboard foldable two wheeler for the last mile, a must. More than just about anyone the Rinspeed boss knows how to play on strong emotions and dreams beyond the macho horsepower affectation. This is the fundamental reason why Rinderknecht is considered an automotive visionary by many.

This car irritates. Could be that it’s the ingenious crafted creation of world-renowned New York pop artist James Rizzi. In any case, Frank M. Rinderknecht’s latest work “BamBoo” lets the sun rise over the over-engineered metal creatures at the Geneva Motor Show, whose single purpose is to never touch anything other than black asphalt. Yes, this is a taste of summer.

The 1,090-kilogram BamBoo’s speed is governed to top out at 120 km/h, but it’ll get 105 kms on a single charge before having to refuel at an RWE intelligent charging station.

There have been no solid specifics given as per production, but the last lines of their statement do give some promising hints that there are plans in place.

…bustling Frank M. Rinderknecht wants to seize this chance as figurehead of Swiss watch manufacturer C.F. Bucherer and thinks aloud about a series production. Rinderknecht will only say this: “Yes, there have been constructive talks for some time with a number of potential manufacturers.” To be on the safe side, the Düsseldorf consulting firm A.T. Kearney already has manufacturing and company concepts for a series production in the drawer.

For those lucky enough to be attending the Geneva Auto Show next month, you won’t need to keep your eyes too open to spot this beauty amongst the others.