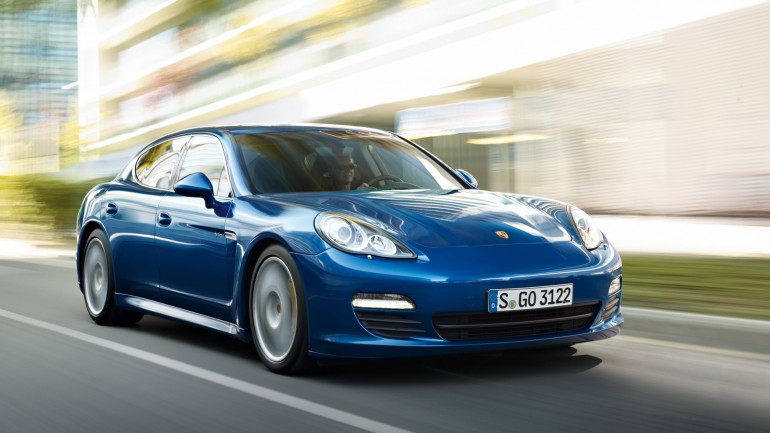 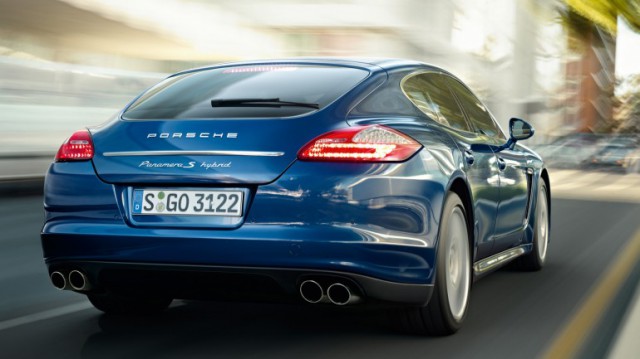 Who said that you had to sacrifice performance for fuel economy? Certainly not the folks at Porsche, because they’ve decided to take the engine from the Cayenne S Hybrid and plunk it into the much more aerodynamic Porsche Panamera S Hybrid.

Despite having a 3.0L super-charged V6 (good for 333 hp) and a 47 hp electric motor, the Panamera S Hybrid is able to get a combined fuel economy of 30.4 miles per gallon (6.8l/100km). That puts it on par with cars quite a bit smaller and quite a bit weaker. The green part of the equation is pretty good too with CO2 emissions of 159g/km.

What happens when you reign in the combined 380 horses at the beck and call of your right foot? You’ll go from zero to 62mph in 6.0 seconds before topping out at 168mph. That’s nothing to sneeze at, remembering that this is pretty much a full-sized four-door sports sedan. The usual Porsche accoutrements apply too like bi-xenon headlights, tire pressure monitoring, automatic dimming rearview mirrors, touchscreen satnav, and an eight-speed Tiptronic S gearbox.

Given what you get, the $95,000 US asking price doesn’t sound so terrible, especially when you place it next to the Aussie price of $298,300. Even so, I’m not a fan of a four-door Porsche. Jeremy Clarkson would probably say it’s bollocks too, but he’s no fan of hybrids either.

The Panamera S Hybrid marks the beginning of a new chapter of Porsche Intelligent Performance, as well as continuing the success story of the four door Gran Turismo. Without sacrificing its sporting driving dynamics and elegant travel for four passengers, the new Panamera S Hybrid combines a total power output of 380 hp (279 kW) with CO2 emissions of just 159 g/km, achieving a performance ratio of 2.39 hp per g/ CO2 that is unbeaten in the UK car market.

In addition to offering 0-62mph in 6.0 seconds and a top speed of 168 mph, the Panamera S Hybrid returns fuel economy of 30.4mpg Combined. These statistics position the Panamera S Hybrid as offering impressive levels of efficiency, achieved through a combination of clever engineering solutions under the skin and the use of lower rolling resistance tyres specially-developed by Michelin.

The range in purely electric mode is approximately 1.25 miles, with driving in this mode possible up to 53 mph, depending on the road and traffic conditions. The Porsche hybrid drive is also the only system in the world able to exploit additional consumption reserves thanks to its so-called ‘sailing’ function. During phases when no power is required from the combustion engine, ‘sailing’ entails switching off the engine and disengaging the drivetrain at speeds of up to 103 mph (Cayenne S Hybrid 97 mph).

The Panamera S Hybrid is driven by the same engine combination that has already proved itself in the Cayenne S Hybrid, a model which already accounts for a fifth of Cayenne sales in the UK. The main propulsion is provided by a supercharged three-litre V6 engine delivering 333 hp (245 kW) supported by a 47 hp (34 kW) electric motor. Both power units are capable of powering the Panamera S Hybrid either alone or in combination. The electric motor also operates as a generator and a starter. Together with the separating clutch, it forms the compact hybrid module located between the combustion engine and the transmission.

The electric motor is connected to a nickel metal hydride (NiMh) battery where the electrical energy recovered while braking and driving is stored. Power transmission is handled by the familiar eight-speed Tiptronic S, with a wide spread of ratios, as already fitted to the Cayenne.

The Panamera S Hybrid also features adaptive air suspension as standard, plus the innovative display panel – already seen in the Cayenne Hybrid – that provides the driver with all the relevant information about the vehicle’s specific hybrid driving status.

With the introduction of the new hybrid, the Panamera range now comprises six different models with a choice of two- and four-wheel drive and four engines. This diversity echoes the evolving preferences of Porsche customers, and which the sales success of the Panamera is already confirming. Approximately 15 months after sales started, nearly 30,000 vehicles have been delivered worldwide, of which over 1,000 have been in the UK.

The Panamera S Hybrid goes on sale in the UK in June 2011, priced from GBP86,146. The low emissions of 159 g/km CO2 is of particular relevance to fleet and company car buyers as it sits under the Company Write Down Allowance threshold of 160g/km. This means for a company purchase, the price can be offset against tax at the rate of 20% per annum.

Fitted to every Panamera is a Porsche Vehicle Tracking System (VTS), a sophisticated vehicle security package approved to Thatcham Category 5 standard, and customers will also be able to explore the potential of their new car by participating in a complimentary course at the Porsche Experience Centre, Silverstone.