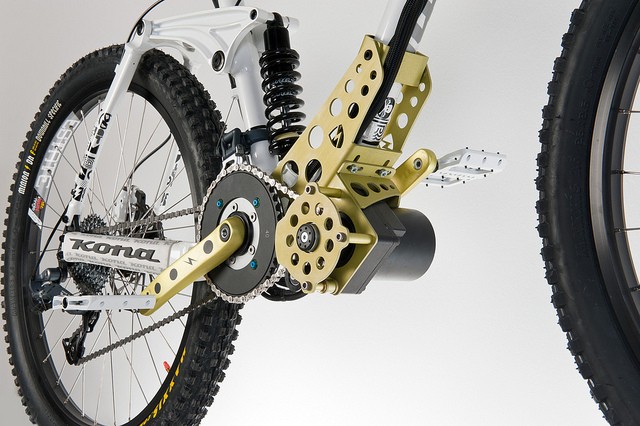 It seems retrofit bicycle motors are seeing a resurgence in the market, a point emphasised by the new EGO-Kit motor for mountain bikes.

As a product aimed at downhill mountainbiking, EGO-Kit is able to bypass legal upper limits for speed and power as they stand for conventional e-bikes. As such, the high-torque 48V motor offers 2400W of maximum power and a nominal 1200W with a top speed of 70 km/h (43 mph). An included lithium-iron phosphate backpack-worn battery gives a 40 km range on a single charge and recharges in 1.5-hours.

And the best part? The motor’s mounting bracket is compatible with 70 per cent of mountain bikes on the market today.

EGO-Kit’s idea is that the motor can replace a chair lift, bringing both the bike and its rider to the top of the mountain in the same fashion they get to the bottom; by riding the bike. The rider has the choice of either using the motor, assisting the motor or forgetting the motor as the throttle and pedals can work exclusively but won’t obstruct one another. What’s more, the low position of the motor when mounted is said to have little effect on the bike’s handling.

These retrofits are a great idea. Rather than putting out one electric bicycle and expecting thousands of consumers to flock to the same type and style, EGO-Kit and other motor makers allow already-avid cyclists to give their own bike a heavy upgrade. No hinderance to individuality. No sheep-like fad-fashion bikes, and no “in” or “out” periods. Just the power to bring your own trusty cycle to places you may not have been able to go before.

Keep ’em coming, EGO-Kit. Maybe make the next one for mountainboards rather than mountainbikes, eh?