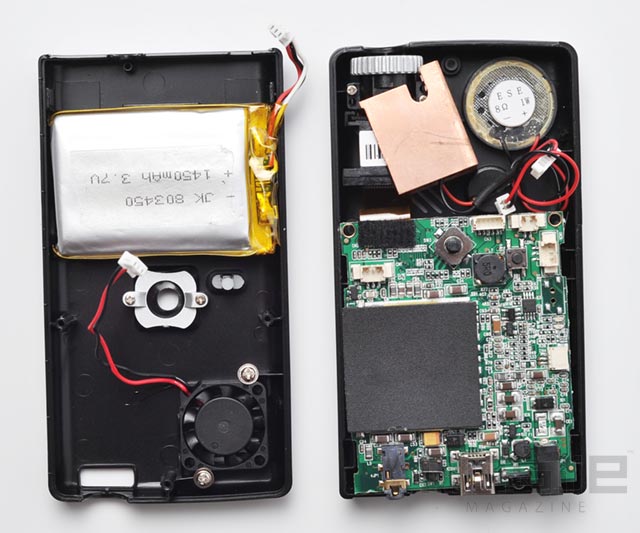 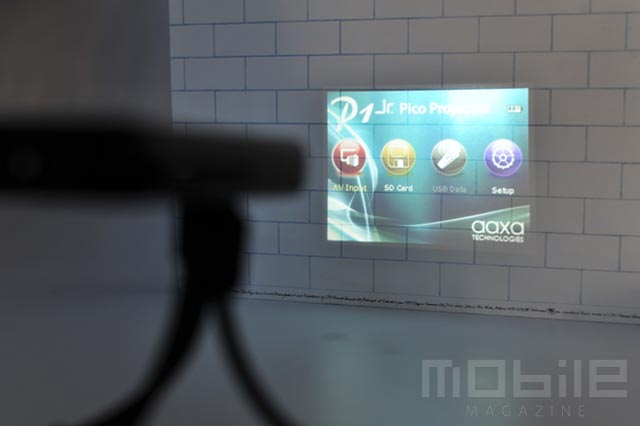 Pico projector’s are relatively new to consumers. They haven’t gained a widespread adoption yet, simply because not many people can imagine the possibilities of carrying one around. At nearly anytime and anyplace you can pull up a 50″ screen on a wall and begin presenting, displaying or projecting a video.

This is not going to replace your LCD TV, nor will it replace your full-sized projector. This will go along in that ever-shrinking gadget bag of yours, giving you an enhanced sense of mobility and that cutting edge ability of blasting a film on the wall at any time.

We’re only months away from these devices becoming integrated within many mobile phones, tablets, and other devices. We saw camcorders packing pico projectors at CES, we also saw the reference design for a new type of pico projector, the MicroVision PicoP laser display. These devices in essence are evolutions of the Aaxa P1 Junior. 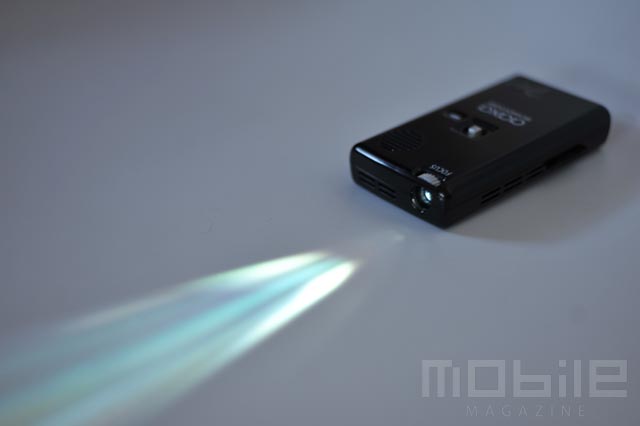 Hardware
The Aaxa Technologies P1 Jr. is very small and lightweight. Aaaxa says it’s the world’s smallest LCOS pico projector with onboard MP4 player, and that’s not hard to believe.

Inside is a 10 ANSI Lumen LED bulb. It’s life is approximately 15,000 hours, which is quite typical for LED. It’s capable of projecting an image from 10-50-inches, has a manual focusing lens, a 1 Watt speaker, 5V, 2000 mAh battery giving 1 hour of use, Mini USB port, SD Card slot, measures 105mm x 56mm x 20mm and weighs just 126g. Inside the box is a composite A/V cable for outputting video from your mobile device, iPad or iPhone (adapter required), DVD player, PSP, or what have you, as well as USB cable, charger, and a small tripod.

It feels solid enough to not feel like a complete toy, but at $110 what do you want? The fan is a bit noisy but it is there to keeps things cool and since it’s LED, you have instant-on and off capabilities.  The fan is situated on top and the speaker on the bottom. Sound from the speaker is audible, I wouldn’t say it is “good” either. If the speaker was perhaps placed on top and the fan on the bottom it may have made for a better sound. The manufacturer rates it at .5 watts, I opened it up and discovered it was a 1 watt speaker. Not a huge difference, but it’s probably better than a .5 watt.

Connection via Mini-USB does not charge. This was a disappointing fact that I could not have it run off my laptop power, or a small power pack via USB. The battery must be charged off the 5V power adapter and it takes 3-4 hours to get 1 hour and it’s just another thing to carry along.

The button and controls are small and relatively easy to use so long as you don’t have bear paw hands. The D-Pad style control gave me some difficulty, I suspect it was software lag rather than hardware because moving it in the direction I want was no problem at all. 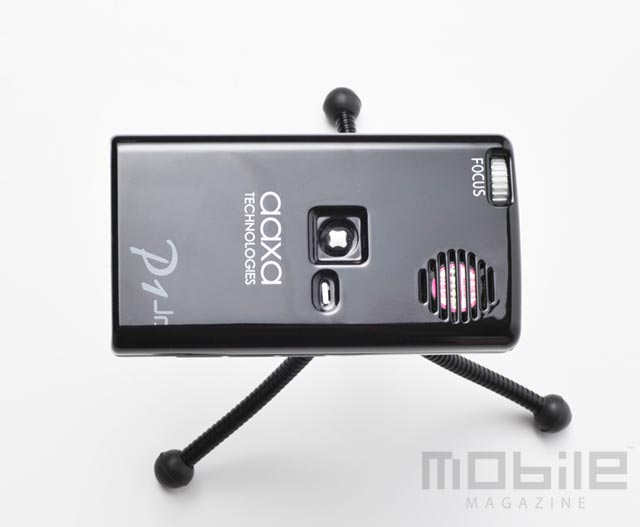 Software
The Aaxatech software is fairly decent but could use some improvement. I had issues with file formats in playing video, as well as displaying very large images from my DSLR but that was my fault. Keep in mind this is a Pico Projector, video resolutions and image sizes will have to be smaller than we are used to seeing on a desktop; think mobile phone size. NTSC and PAL are supported at resolutions up to 720×480. Video compression is a bit nitpicky, and has to be DivX; XViD; MPEG-2; MPEG-4 or AVI; MP4; MPG; 3GP; RMVB; RM; VOB; DAT. It also plays MP3 compressed with AAC, MPEG2 or MPEG4. JPG images are only supported.

Playing videos was good. Although pausing, fast forwarding and things like that were not the greatest. Sometimes crashing the video app or just not responding at all. This could have been due to the file size I was using as smaller files seemed to respond fairly well.

Image Quality
This thing is tiny, it’s only 10 lumens too, so keep that in mind. The image it projects is somewhat pixelated and has good contrast. It is definitely watchable and in a dark room you can enjoy a nicely sized screen on any brightly painted wall. The larger you go the more pixels you will notice, also the farther you go obviously the picture will be darker. The optimal size I found was around 30 to 35-inches for a not so pixelated look with a decent amount brightness in a semi-dark room. If there is too much light in the room it will of course looked washed out. That also depends on the quality of the source video or images you are playing.

Bottom Line
I really liked the SD card support – being able to just pull up videos and images on the card was easy and convenient. I think battery life needs to be improved as well as sound quality but a worthy sacrifice for ultimate portability and convenience and on par with other pico projectors out there. Not able to charge via USB was the biggest downfall. At $110 you won’t find any 10 lumen LED projector better than this.

Special for our readers: If you wan’t to go a bit brighter, but still stay portable, Aaxa has two specials on right now for our readers if they buy the M1 or M2. The P1 Jr. is already discounted. 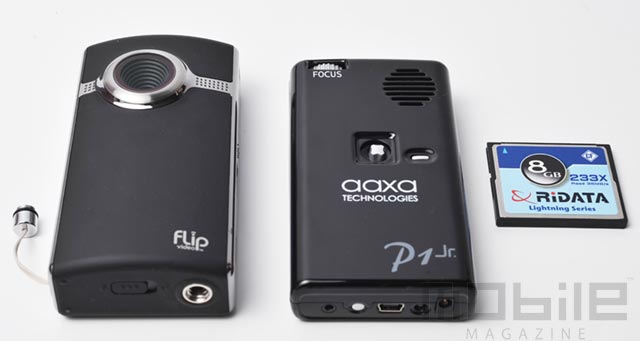 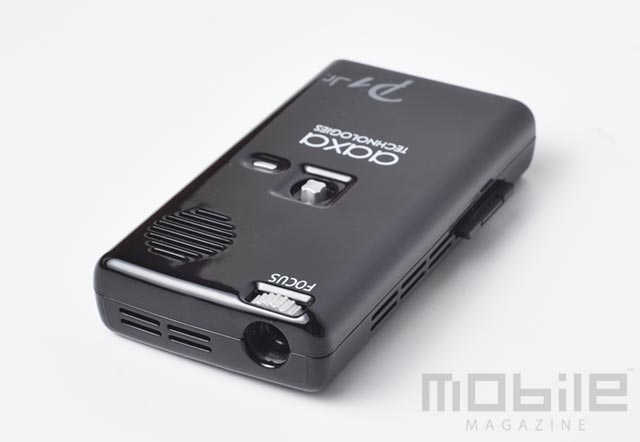 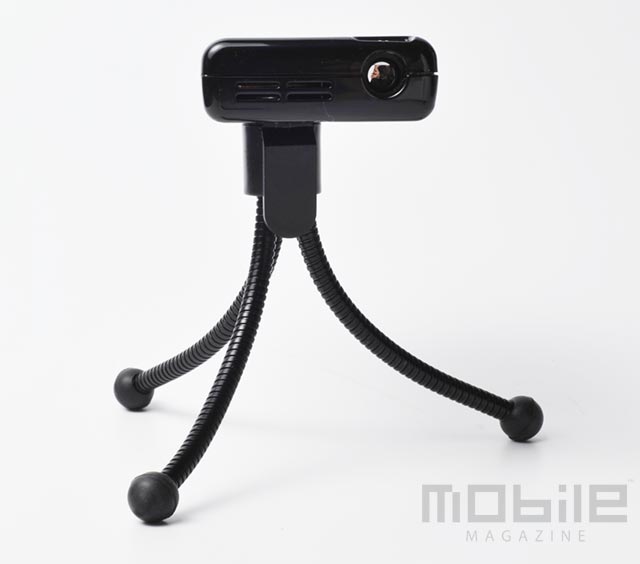 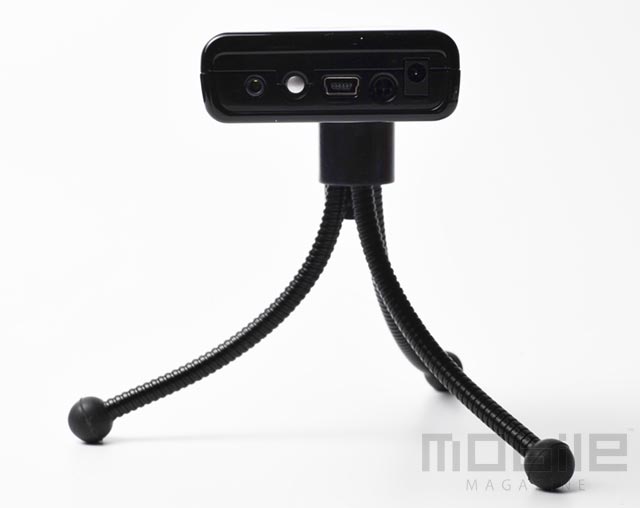 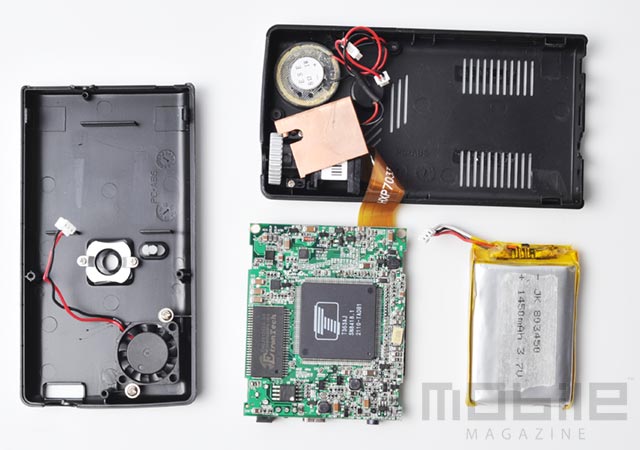