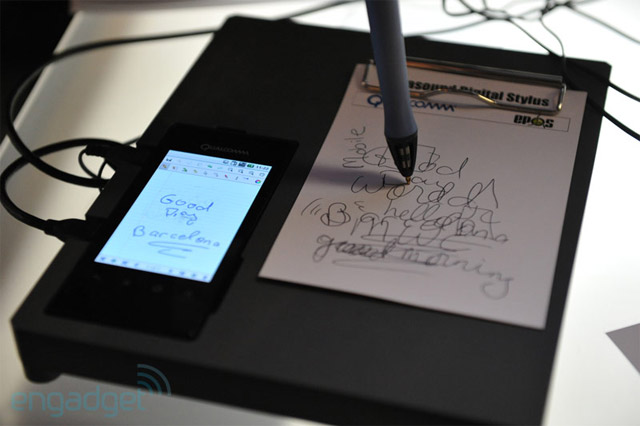 Okay, this Qualcomm ultrasonic pen really has very little to do with the Beach Boys, but that’s immediately what came to mind when I first heard about how it works. We’ve seen other pen products that are able to transcribe actual scribblings into a digital notepad, but the ultrasonic pen works with vibrations.

From the user side of things, the experience will be much the same. You whip out the special pen, which can be equipped with regular old pen ink, and start jotting down what you need to jot down on an actual piece of paper. Meanwhile, the battery-powered transceiver inside is sending that information over to your nearby smartphone, tablet, or notebook.

What’s interesting is the receiving device, whatever it may be, can use standard off-the-shelf microphones to pick up vibrations from the pen with a radius of around 30 centimeters. Using the Epos software, the data is coordinated into text, which can then be easily imported into just about any text app. You can even import it into a translation app to take your English scribblings and convert them into whatever language you’d like.

It’s just a concept being shown off at MWC, but it could prove interesting for, say, college students taking notes in class.