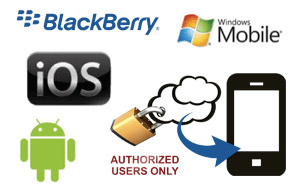 One of the reasons why people choose a BlackBerry device over other smartphones is that the BlackBerry service is supposed to be safer with all its advanced data encryption. Not to take anything away from Research in Motion, but Echoworx is taking this one step further by offering a cross-platform mobile encryption solution.

Instead of being bound to one operating system or another, the Echoworx Mobile Encryption Platform is designed to automatically encrypt all incoming and outgoing communications at the source with no need for user intervention. This is largely catering to folks who need enterprise email and data protection, but anyone who wants to keep their data private could be interested.

The cloud-based solution should work “with all major mobile operating systems including iOS, Android and BlackBerry OS with native apps.” Because it’s cloud-based and encrypted at the source, it means that your data stays safe even if you use unprotected Wi-Fi networks for access. That’s almost better than BES, isn’t it? Almost.

In any case, expect the Echoworx Mobile Encryption Platform to filter through their partner channels next month.

The Mobile Encryption Platform, which will be available to the Echoworx partner channel in mid-March 2011, is the first enterprise encryption platform designed specifically for private mobile communications. As a cloud-based solution, it enables integration with all major mobile operating systems including iOS, Android and BlackBerry OS with native apps. Incoming and outgoing communications are automatically encrypted at the source without the need for user intervention.

“The Mobile Encryption Platform is the only global solution that enables encryption for all the major mobile device platforms,” says Michael Ginsberg, President and CEO of Echoworx. “As it embraces a cloud-based model, data in motion or in use by mobile users is always encrypted and safe. This promises to deliver huge benefits for today’s enterprises; and represents a significant sales opportunity for our partners.”

According to Ginsberg, the ubiquitous use of mobile devices in the enterprise translates into less control and increased risk. “IT managers simply can’t control security on unprotected wi-fi networks. In addition, escalating iPhone and Android usage by mobile workers means that every phone is potentially a business device and therefore a danger to security. Business leaders realize that the old way of managing encryption on a platform-by-platform basis simply won’t work. What we offer is a simple yet highly secure strategy that keeps sensitive information off devices by moving data to the cloud and securing it at its source where it can’t be reached by unauthorized users.”

As an addition to the Echoworx suite of existing email encryption offerings, the Mobile Encryption Platform will provide partners with an unprecedented array of security capabilities to offer their customers. “If you just look at the demand we’re getting for mobile encryption alone, the numbers are staggering,” Ginsberg says. “Mobile encryption comes up in just about every conversation we have. I had a request for 800 seats recently from a business that had a large contingent of Android users. It’s clear that today’s enterprises want and need this kind of protection for their mobile communications; and Echoworx is looking forward to working with our partners to support those customers.”

Echoworx Mobile Encryption Platform is specifically designed for user integration with all major mobile operating systems including iOS, Android and BlackBerry OS with native apps. Once launched users can download the iPhone, BlackBerry or Android app from the Apple Store, BlackBerry App World or directly from Echoworx. The apps will support iPads, iPhones, RIM devices including Playbook, Android tablets and more. Plans are also in place to add Windows capabilities in the near future. It ensures confidentiality and user authenticity by applying identification and authentication processes based on the most stringent security standards available.

Echoworx Corporation is the leading provider of managed encryption services for complete enterprise email and data protection. The company is an encryption service provider of choice for, Symantec, AT&T, Verizon, McAfee, BT, Intermedia and Apptix among other global enterprises. Echoworx provides a SaaS (software as a service) model; it is built on best-of-breed technology and reduces encryption complexity for the end user. With Echoworx, organizations can protect their email and data without changing their day to day workflow and can easily send encrypted documents and digitally signed email messages to anyone in their address book. For more information: www.echoworx.com