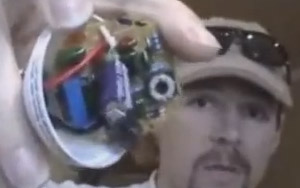 When compact fluorescent bulbs first hit the scene, they were a revolution. A bulb that lasted many times as long as the incandescent counterpart and used only a fraction of the power. Well, GE put out an ecomagination challenge to see what they could do next and this idea is easily one of the best.

In the video below, you can see Robert Hand show a prototype of his idea that requires you to just replace the “bulb” part of a compact fluorescent rather than replacing the whole thing. The ballast part can be reused, Hand say it’s really the most expensive part of the package anyhow and easily outlasts the tubular twisty bit containing the chemical gas.

CFLs are supposed to save you money in the long run because they last so much longer and use less energy. They can get even cheaper if you can reuse the ballast part. Pretty interesting stuff, don’t you think?