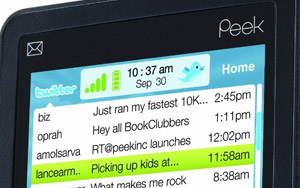 Yes, we know that there are no “official” Facebook phones coming out of Zuckerburg’s money factory, but both HTC and INQ have revealed their Android phones with heavy Facebook integration. The HTC phones even have dedicated Facebook buttons. So, where does this leave the other elephant in the room?

Costello did go on to say that he would like to “see deeper integration of Twitter on smartphones,” which is really what we’re getting now with the “Facebook phones” from INQ and HTC. Does this mean that we could soon be seeing “Twitter phones” anyway? Maybe.

For my part, I don’t want a Facebook phone or a Twitter phone. I want an Android phone and, if it happens to have some social networking integration, all the better. Does it really matter how it’s branded?