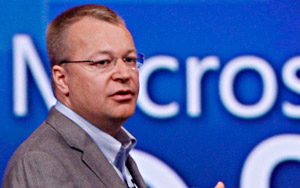 Ask a good number of smartphone enthusiasts and they may have told you that Nokia should have ditched Symbian in favor of Android a long time ago. Why, then, did the Finnish phone giant opt out of embracing Google? Why did it choose Microsoft instead?

Apparently, according to Nokia CEO Stephen Elop, they opted for Windows Phone 7 to because they wanted to avoid a “duopoly.” They were concerned that the Nokia-Google tandem would create a market wherein it’d only be them and Apple. Instead, Elop says they “wanted to create a challenger.”

Right, because everyone would much rather be a strong third than split the top spot with one other party. Right, because it has nothing to do with the fact that Elop was formally playing for the same team as Ballmer and Gates. I’m not necessarily saying that going with WP7 is bad move (though the stock drop and massive exodus appear to indicate otherwise); I’m just saying the avoidance of a duopoly isn’t that good a reason.

Either way, it’ll be interesting to see how these two juggernauts combine their efforts. Bing Maps or Ovi Maps? Ovi Store or Windows Marketplace? Or, more likely than not, we’ll get some Frankensteined combination of the two.