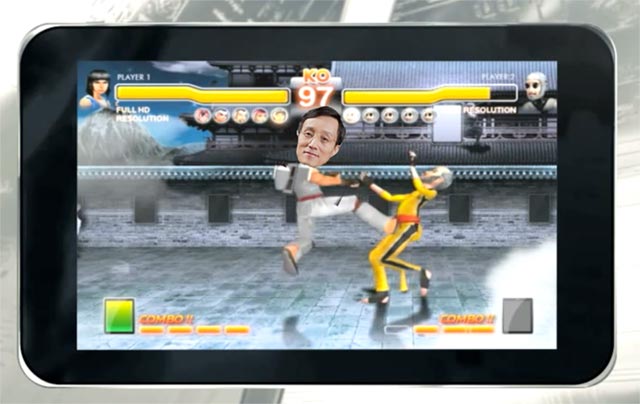 LG’s marketing is tasteless to say the least. They release a video for the newly announced Optimus Pad, aka G-Slate, with a simulated “Spec Fighter” video game challenging what clearly resembles Apple CEO Steve Jobs and the iPad, not so cleverly renamed to the A-Pad. LG’s unnamed Ninja kicks Jobs in the face at about the 1:00 minute mark of the video.

I’m not an Apple fanboy by any means, but Jobs is not well, and that is publicly known. I’m not saying the guy needs to be babied, but your marketing approach LG, is pitiful. So you beat the specs of a one year old device, you should get the virtual award you so deserve. But when it comes to the real world, you’re still not even close to second best.

Why didn’t you use your own CEO’s face on the one who kicked Steve Jobs shamelessly in the head? Perhaps because you don’t even have a CEO who could stand up to Jobs. You fired your last one because your cellphones are generally regarded as subsidized giveaways (crap), now you expect the next CEO to stand by you? You better keep hiring new CEOs because the next iPad is going to dust your ass again. You may be laughing in your boardroom now, but wait until your next quarterly earnings are released including this tablets sales.