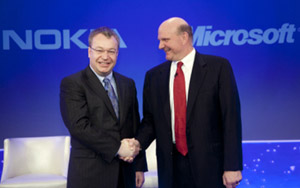 After all kinds of rumor and hearsay, the relationship is now official. Nokia and Microsoft are going steady. Elop and Ballmer even exchanged promise rings. (Okay, not really, but they may as well have.)

Nokia and Microsoft are teaming up to bring Windows Phone 7 to Nokia smartphones. It’s a move that almost sounds like it makes sense, since Windows Phone 7 shows some promise (but hasn’t really carved out huge market share yet) and Nokia is still a leader in hardware sales (though those numbers are quickly slumping).

The idea, I suppose, is that they can capitalize on their synergistic advantages, better equipping themselves to fight off the iPhones and Androids of the world. Remember that, up until now, Nokia has remained steadfast with using its own operating systems. This is a huge shift, but considering that Elop was once with Microsoft, it’s a move that shouldn’t come as too much of a surprise.

Unfortunately for both companies, this relationship could be ill-fated from the beginning. Nokia shares plummeted nearly 10% on the news and, in a strange twist of fate, Microsoft is paying Nokia “hundreds of millions of dollars” to use WP7. This comes in the form of “engineering assistance and marketing support.”

Maybe this synergy will work. Nokia has incredible economies of scale and it has a huge foot-hold in nearly every country around the world (though its presence in North America isn’t nearly as prominent). Windows Phone 7, even in its early stages, is showing promise and having Nokia’s level of reach could be most helpful. Then again, they could still be doomed. Time will tell. This is just the honeymoon period for these two lovebirds; wait until the “old couple” bickering comes into the picture. One thing is for certain, not many of Nokia employees are happy with the decision as 1000 walked off the job today.

It looks like Bill Gates dumping 90,000,000 Microsoft shares was a smarter move than many may have realized.