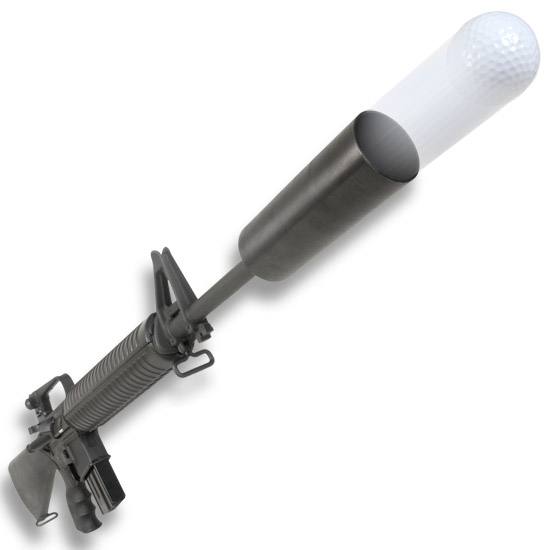 Golf is a sport of patience and technique, while firearms are essentially contained explosions that launch projectiles into targets. The two hobbies, though both involving a small projectile, are never usually associated, let alone mentioned in the same sentence. That is until now, New Century NcStar, Inc., a manufacturer of gun accessories has managed to find a way to combine the two distinctly different hobbies, with an assault rifle attachment that can launch golf balls over 250-yards.

It apparently works on most AR-15, M4 and M16 rifles, and replaces the muzzle brake or flash hider at the tip of the barrel. Machined from solid-stock steel, it is significantly heavy, though you probably won’t be hiking this up a mountain. There is no need to alter your firearm, it simply fits on to fire your golf balls 250-yards using .223 BLANKS (BAM-006); the manufacturer notes not to use live rounds. It has be described as “the funniest attachment ever purchased” but needless to say, the launcher is still attached to a high-power rifle and misuse is dangerous, so it should be handled with the highest level of care.

So if you have been waiting for the opportunity to be able to enjoy your two favorite pastimes of golf and shooting, or if you just want to shoot the ball as far as Tiger, this gadget may be up your alley, provided that you do own an assault rifle. A new wave of golfing could be coming.

[Geekologie via Cheap and Dirt]