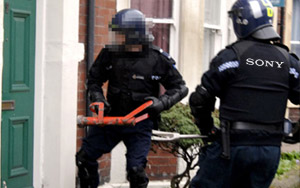 Sony is making both Microsoft and Metallica look downright cool as their lawsuit against GeoHot continues to unfold.

The U.S. District Judge Susan Illston is forcing PlayStation 3 hacker George Hotz to surrender his computer’s hard drive to Sony to sift through in order to retrieve information relating to the hacking of their product.

But they’re not stopping there. Sony says they’ll sue anyone who posts the code, has sent out an undisclosed number of DMCA “takedown” notices to websites demanding the code’s removal, and is asking the judge to force Google and Twitter to surrender IP addresses and information of everyone who’s viewed or commented on Hotz’ jailbreak video and the hackers who first unveiled a limited version of the hack on Twitter in December.

Hotz created the code to allow for home-brewed games on Sony’s Playstation console without allowing pirated games, and posted the code on his website last month as well as a how-to video on YouTube. Sony then launched a suit on Digital Millennium Copyright Act civil allegations, accusing him of trafficking in devices that circumvent controls meant to protect copyrighted works.

Orders to surrender the full contents of a defendant’s computer hard drive are common-place in cases relating to child pornography or when a journalist has kept the names of sources confidential in criminal situations. But this is sure to set a strong precedent for future hacker cases, despite the fact that GeoHot won the Apple suit after doing exactly the same thing to jailbreak the iPhone.

“The conduct Mr. Hotz has engaged in is still covered by the DMCA,” said Sony attorney James Gilliland, pointing out that game consoles and mobile phones fall under different laws.