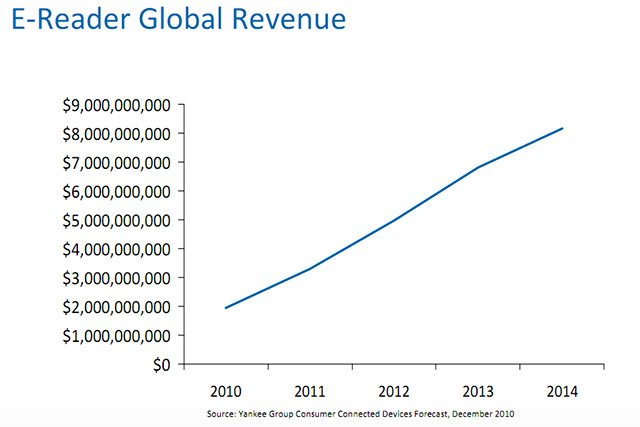 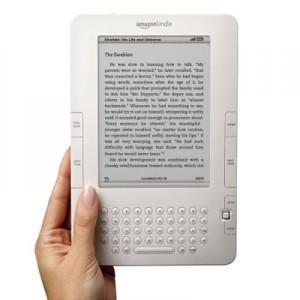 What’s that? You thought the Internet generation was only interested in tweets and YouTube videos? As it turns out we still read books, but we’ll be increasingly turning to e-books moving forward. In fact, a forecast is calling for some huge growth in the e-book market.

As it stands, global e-book reader sales were recorded at about $1.9 billion last year with a total of just under 11 million units sold. According to Yankee Group, those numbers will increase to $8.2 billion and nearly 72 million units, respectively, by 2014. That’s a lot of growth.

The forecast also calls for a worldwide doubling of the installed base of e-readers each year (up to 127 million by 2014), even faster adoption by the European market (143% growth each year, compared to 19% growth in smartphones), and reductions in the average e-reader price. Right now, the average e-reader is $182. They’re expecting that to drop to $114 by 2014.

Considering that you can already pick up something like the Kobo Reader for $100, you realize how far we’ve come from the initial $300+ price tags of the first Kindles. That said, tablets like the iPad weren’t supposed to replace e-readers… but they have been for many people. Is that the real wave of the future or will e-paper and e-ink still have teeth? I don’t read a lot of books, but I am getting more and more tempted to get one of these things.

“Falling prices, growing content libraries and color e-paper displays will persuade consumers around the world to snap up e-readers like Amazon’s Kindle”
The forecast also predicts:

Worldwide installed base of e-readers will double each year. The installed base will grow at a CAGR of over 100 percent, from 12 million in 2010 to 127 million in 2014.
Europeans will snap up e-readers. The installed base of e-readers in Europe will grow at a CAGR of 143 percent from 2010 to 2014. The installed base of smartphones will grow at only 19 percent over the same period.
The average price tag for e-readers will fall. By 2014, the average retail price for an e-reader device will be $114, down from an average of $182 in 2010.
E-reader sales will generate more revenue in Asia-Pacific than in North America by 2014. In 2010, North America accounted for 57 percent of all e-reader sales revenue, while Asia-Pacific garnered only 34 percent. By 2014, Asia-Pacific will account for 49 percent of all e-reader sales revenue, while North America will account for only 39 percent.
“Falling prices, growing content libraries and color e-paper displays will persuade consumers around the world to snap up e-readers like Amazon’s Kindle,” said Dmitriy Molchanov, analyst at Yankee Group and author of the forecast. “Consumers in China and India will be responsible for a growing proportion of worldwide sales as Asia-Pacific’s middle class continues to grow.”

To download a free snapshot of the global e-reader forecast, visit http://web.yankeegroup.com/2011TabletForecastSnapshot-Registration.html

The people of Yankee Group are the global connectivity experts—the leading source of insight and counsel trusted by builders, operators and drivers of connectivity solutions for 40 years. Headquartered in Boston, Yankee Group has a global presence, including operations in Europe, the Middle East, Africa, Latin America and Asia-Pacific. Visit www.yankeegroup.com.