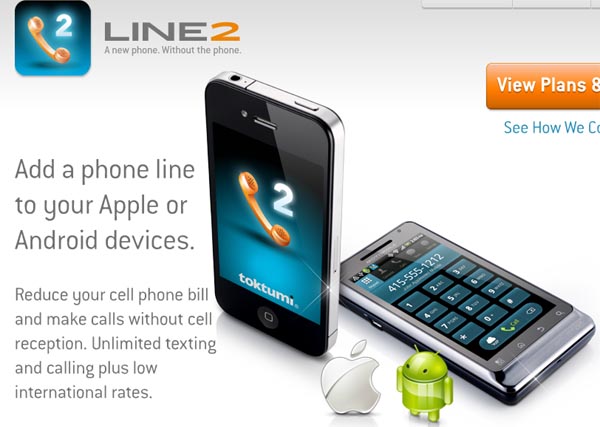 Those of you looking to grab the Verizon iPhone 4 may be surprised to hear that the phone doesn’t support network multitasking.  You have to choose between voice or data, not both simultaneously as is possible with the AT&T iPhone 4.  What this means is that when you answer a voice call all of your apps will be pushed offline, you can’t check online schedules, you won’t even receive emails or be able to browse the web while talking.  If you’re on Verizon now with another smartphone you’re probably used to this.  It’s for all those interested in switching over from AT&T.  Contrary to what some people will tell you, this isn’t Apple’s fault. What’s more, the Verizon iPhone isn’t the only phone with this “problem,” it’s any phone on CDMA.

“It’s a feature of CDMA,” says Apple’s Natalie Harrison. “You can’t do voice and data simultaneously. Every CDMA phone is like that.”

That’s right. So when we received a press release from Toktumi Inc. saying their Line2 service “fixes the Verizon iPhone’s inability to multitask” and that “the upcoming Verizon iPhone will only support a voice OR data connection, not BOTH simultaneously over Verizon’s CDMA network,” I was shocked.

Line2 basically combines VoIP and cellular calling under a single phone number, it won first place in the Mobile Apps Showdown at this year’s CES and might be the best app out there to handle this. Giving you voice capabilities over data while still being able to use data and saving you heaps of money in calling fees. Check the PR below for full details.

San Francisco, CA — Line2, the only app for Apple and Android devices with tri-mode calling technology, fixes the Verizon iPhone’s inability to multitask. With the upcoming release of the Verizon iPhone just days away there are several issues that potential Verizon iPhone users should be aware of. The upcoming Verizon iPhone will only support a voice OR data connection, not BOTH simultaneously over Verizon’s CDMA network. This will come as an unwelcome surprise to AT&T iPhone users who are used to being able to run their apps and connect to the internet while on a call over AT&T’s GSM network. Verizon iPhone users will have to choose one or the other type of connection. This means that while on a Verizon iPhone call, users will not be able to browse websites, receive new email messages, or access live information from internet-connected apps like Google Maps, Flixster, or Opentable.

Fortunately Line2 has the perfect solution to the Verizon multi-tasking issue. With Line2’s tri-mode calling capabilities you can call and text over Wi-Fi or cellular 3Gdata networks without interfering with any other app or browser connection. The only time a Line2 user won’t be able to use multiple apps is when they don’t have a Wi-Fi or 3G data connection and instead are using the underlying cellular voice line to complete the call, a feature offered by Line2 when needed. With Verizon’s strong 3G data network, however, most customers will be able to place Line2 calls via VoIP over 3G, saving cell plan minutes and allowing true multitasking.

Line2 recommends that Verizon iPhone users port their main number to Line2 at no charge and sign up for the minimum Verizon calling plan – 450 Talk for $69.98 with unlimited data. Using Line2 as your primary number will allow you to enjoy the iPhone’s built-in multi-tasking capabilities and will also save you between $600-1000 a year compared to subscribing to Verizon’s unlimited plan.