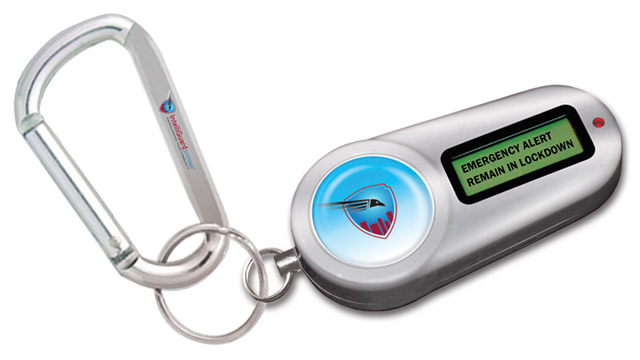 In an effort to combat parents’ lack of trust in college crisis management systems, IntelliGuard is offering a work-around for post-secondary institutions to bypass mobile networks with emergency alerts.

Many colleges and universities now use SMS messages to students’ cell phones to relay emergency information, such as in the recent string of campus shootings. But wireless networks quickly get bogged down, leading to delays of 20 minutes or more in some cases before students even know there’s a present danger.

With IntelliGuard’s RAVENAlert system, colleges could use a private wireless network to send messages to every receiver on a campus simultaneously, whether to keychain receiver devices, free-standing wall units or even a 53″ digital outdoor venue sign.

“Our existing layered emergency alert system relies on SMS/text and email, which are adequate when time isn’t a critical factor,” says Koren V. Kanadanian, director of emergency management at Providence (RI) College. “But when I have to send multiple messages of instruction during an emergency, I have no control over what the cell carriers do. Plus once an initial emergency alert is sent, the students immediately call their parents to let them know what’s happening, which only clogs the network further, adding to the delay of message delivery. With IntelliGuard, I know that everyone will get every message that’s sent out at the same time in seconds.”

The technology is already used in hospitals and paging industries, and is capable of sending emergency messages to an unlimited number of recipients at the same time in less than 20 seconds.

But if you tell any group of students they need to carry around an ugly keychain for the rest of their post-sec career, some will rebel. Some will get drunk and lose it.

Personally, I think it would make more sense to require manufacturers to embed the medium-range receivers in all new models of cell phones, smart phones, tablets; if they were designed to receive any emergency signal in range, the system could be a boon for security not only in campuses, but all other increasingly-usual targets of mass attacks such as airports. If that were the case, any personal electronics in use would display the emergency message to everyone in range.

LEWISVILLE, Texas–(BUSINESS WIRE)–Just four in 10 parents of college bound students think that college campuses are safe, and only three percent of parents believe colleges are very well equipped to deal with emergencies, according to a recent survey conducted by Kelton Research.

“Cellular networks are fine for day-to-day communications, but during a life-threatening event when you must alert thousands of people simultaneously, SMS/text messaging does not work”
In the wake of recent shootings on college campuses, which exposed up to 20-minute delays in the receipt of emergency messages sent to students’ cell phones, safety now ranks among the top criteria parents weigh in choosing a college for their children.

When an emergency does occur, 90 percent of parents surveyed expect kids to be alerted within five minutes or less. In the recent shooting on the University of Texas in Austin campus, media reports revealed a 23-minute delay between the times two different students received an initial alert sent via text message to their cell phones.

To close this critical time gap, IntelliGuard Systems™ is bringing the same wireless technology used in life and death situations by hospitals and emergency first-responders to college campuses. IntelliGuard Systems offers a dedicated wireless network that simultaneously delivers emergency messages to unlimited recipients on campus, all of which are received in less than 20 seconds.

Having recently completed pilot tests with six colleges — including the University of Southern California (USC) – IntelliGuard Systems is now making its high speed emergency alert solution available to colleges across the country in time for the fall 2011 semester.

USC’s Carey Drayton, Executive Director/Chief of Public Safety, said, “In tests we conducted of the IntelliGuard solution on campus, we were able to verify simultaneous receipt of an emergency message in less than 15 seconds. That type of performance would make IntelliGuard a valuable addition to our existing emergency response capability.”

He added, “This is crucial because when an emergency occurs on campus, our most important concerns are determining what happened, formulating the right message to communicate and then getting that info delivered to our community of students and staff as quickly as possible to keep everyone out of harm’s way.”

“Cellular networks are fine for day-to-day communications, but during a life-threatening event when you must alert thousands of people simultaneously, SMS/text messaging does not work,” said Dave Andersen, President and Chief Operating Officer of IntelliGuard Systems, a wholly owned subsidiary of American Messaging Services. “That’s why we created a dedicated network that delivers both speed and control over emergency communications so that schools can simultaneously notify all students of an emergency immediately and then communicate ongoing developments as they occur.”

Flaws in Cellular during Emergencies

According to 4G Americas, a wireless industry trade association, SMS has significant limitations and shortcomings that make it unsuitable for emergency communications, especially under life-threatening conditions. Yet most colleges that are in compliance with the Clery Act – the federal statute that requires institutions to give timely warnings of events that represent a threat to the safety of students or employees – utilize an SMS/text/email-based alert system to notify students of an emergency.

Emergency alerts sent to thousands of students and faculty over cellular networks are delayed due to the challenge of coordinating alerts across multiple carriers. Additionally, because these alerts are sent sequentially, the more messages sent the greater the time gap between receipt of those messages. Cellular networks also become overburdened quickly and remain that way throughout emergency situations, resulting in even more delay or blockage of critical messages.

“Our existing layered emergency alert system relies on SMS/text and email, which are adequate when time isn’t a critical factor. But when I have to send multiple messages of instruction during an emergency, I have no control over what the cell carriers do. Plus once an initial emergency alert is sent, the students immediately call their parents to let them know what’s happening, which only clogs the network further, adding to the delay of message delivery. With IntelliGuard, I know that everyone will get every message that’s sent out at the same time in seconds,” said Koren V. Kanadanian, MS, Director of Emergency Management, Providence (RI) College.

In contrast to cellular-based systems, IntelliGuard’s advanced wireless network protocol, which is based on an amended, but proven technology previously used in the paging industry, unifies all intended recipients so that emergency alerts can be received by an unlimited number of people and places at the same time in seconds, as opposed to minutes or even hours.

The IntelliGuard System is a private, turnkey solution that includes dedicated wireless transmitters, streamlined dispatch software and alert devices, called RAVENAlert™, that are dedicated and specific to each campus and its students.

RAVENAlert devices display text, emit sounds and/or words, vibrate and display a flashing light as part of their alert arsenal. Unlike cell phones, which often are required to be turned off in class, RAVENAlert devices always remain on. Alerts are delivered to:

RAVENAlert Keychain, a memory-stick-sized receiver that can be worn or carried by every member of a college community.
RAVENAlert Wall Unit, wall-mounted or free-standing in classrooms, dorm rooms, etc.
RAVENAlert LED Display, a 53-inch digital sign for large campus venues.
About the Survey