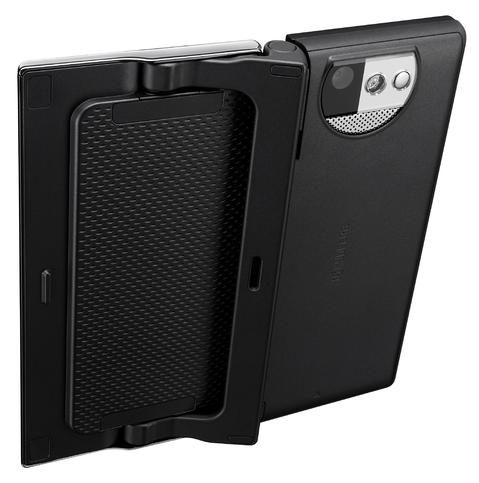 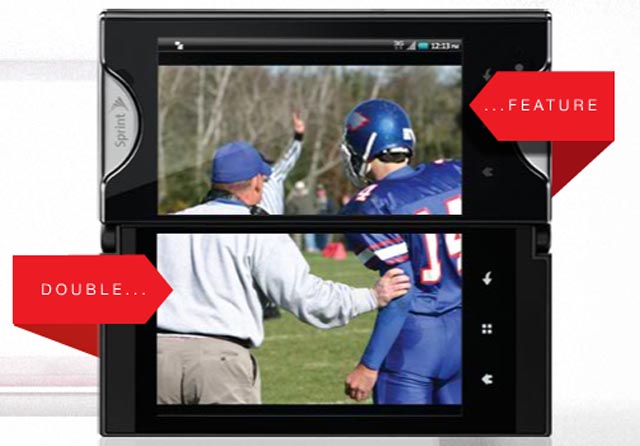 Just as we heard earlier today, a brand new smartphone has arrived on the scene. The Kyocera Echo, to be sold exclusively through Sprint, is the only Google Android smartphone that comes with two touchscreen displays.

What’s interesting is that you can operate the two displays independently or you can combine them to make an oversized 4.7-inch “integrated display.” The former sounds like a cool idea for multitasking, whereas the latter is better suited to the “optimized mode” where you use an “optimized app” to fill both screens. Maybe the bottom screen can be a virtual QWERTY keyboard while the top screen keeps showing your Facebook or e-mail, for example.

In a sea of Android smartphones that look stunningly similar to one another, it’s good to see someone brave enough to go way out there. The stumbling block, I’d imagine, is getting enough devs to fiddle with the SDK to create these “optimized” apps. That and a “Kyocera” is still a hard sell compared to Apple, HTC, or Samsung.

Look for it “this spring” for $199.99 on a two-year contract. More info can be found at EchoByKyocera.com.

Until now, a single screen on a smartphone could only be used to complete one task at a time, even with limited multitasking capabilities available on some smartphones. Kyocera Echo’s second screen provides the ability to do two things at the same time and get more done – send an email on one screen while surfing the web on the other, watch a video on one screen while texting on the other, comparison shop online with one web site on each screen and so much more.

Images and video of Kyocera Echo’s dynamic design in action are available now at www.echobykyocera.com. Pre-registration begins today at www.sprint.com/echo.

In its closed position, Kyocera Echo is a pocket-friendly, single-display smartphone. When opened, Kyocera Echo reveals a revolutionary new platform for wireless multitasking and gives customers a new level of versatility in Android. Its innovative hardware and optimized software enables consumers to use the touchscreens in four unique ways:

“Sprint is proud to boast the most powerful Android portfolio available today and Echo adds to that legacy with industry-leading technology that will change the way our customers use smartphones,” said Sprint CEO Dan Hesse. “Today’s busy schedules often demand that we do at least two things at once. Kyocera Echo is the first device that allows us to do a different task on each of two screens while also providing a tablet-like, larger screen experience that easily fits in a pocket when closed.”

Kyocera Echo will be available this spring for $199.99 with a new two-year service agreement or eligible upgrade and after a $100 mail-in rebate in all Sprint retail channels, including the Web (www.sprint.com) and Telesales (1-800-Sprint1). Pricing excludes surcharges and taxes.

“For years Kyocera has provided handsets to Sprint’s Prepaid Group and MVNOs, as well as to Sprint under the Sanyo brand,” said Eiichi Toriyama, president of Kyocera Communications Inc. “We value greatly our relationship with Sprint and we are thrilled that they have chosen Echo as the standout product with which to reintroduce its customers to the Kyocera brand. With Kyocera Echo, we are proud to give Sprint an iconic, industry-changing device that delivers an entirely new experience for smartphone users.”

Kyocera Echo also includes customized apps optimized for the dual-screen Optimized Mode experience including VueQue™, which lets users watch a YouTube video on one display while browsing, queuing and buffering additional YouTube videos on the other display. Additional applications optimized for the dual-screen experience include:

Beyond the dual touchscreen innovation, Kyocera Echo operates on the Android 2.2 system and has access to more than 100,000 apps in Android Market™ – everything from Facebook to Angry Birds. Additional key features include:

A Software Development Kit (SDK) and developer guide for Kyocera Echo will be available before the launch on the Sprint Application Developer Program (ADP) website at http://developer.sprint.com/android. The developer guide will provide details on developing for a dual-screen handset and Android 2.2 device. It also will provide information on how to take advantage of Kyocera Echo’s unique hardware and software capabilities on the Sprint Network. The Sprint ADP has been providing tools for third-party developers since Sprint first launched the Wireless Web on its phones in 2001.

Some competitors may offer lower prices, but Sprint customers get more with unlimited data while on the Sprint Network with their monthly plan. Sprint offers real simplicity, value and savings vs. competitors, making it easy for customers to get the most out of their phones without using a calculator to tally up costs or worrying about how much data they’ve used.

An optional charge of just $29.99 per month turns on Kyocera Echo’s mobile hotspot feature, connecting up to five Wi-Fi enabled devices, such as laptops, gaming devices and digital cameras, at 3G speeds anywhere on the Sprint 3G network (pricing excludes surcharges and taxes).