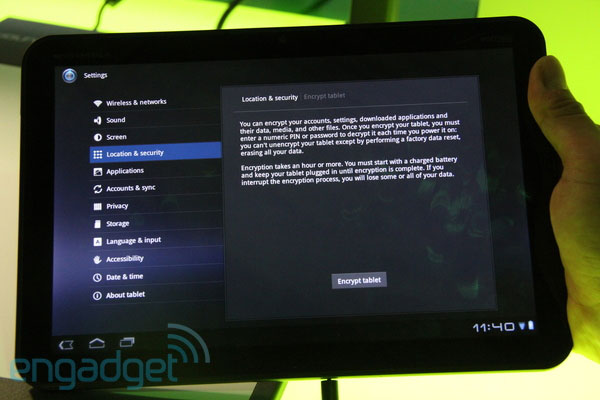 It’s fairly common for people to say that if you want to have a secure smartphone, you should probably get a BlackBerry. Google is looking to infringe on this market, but they’ve got their eyes set on the tablet side of things with encryption in Honeycomb.

Apparently, Android 3.0 will bring the ability to encrypt all the data on the tablet, protecting it with a secure password. This will certainly help get Android tablets in the hands of enterprise users, who may have otherwise been waiting around for the PlayBook later this year.

The image here, which comes by way of Engadget, shows the encryption option page on a Motorola XOOM. When asked, Google says that this feature is not exclusive to Moto and that it will “encrypt your accounts, settings, downloaded applications and their data, media, and other files.”

We don’t know what kind of encryption it’s going to use, but we’re told the process takes about an hour and the only way to decrypt the data is to do a factory reset… which basically erases everything. So yeah, don’t forget your password.