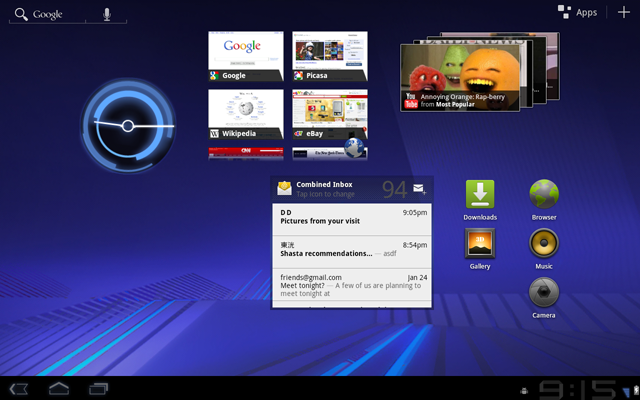 Remember how that Motorola teaser video said that stretching the Android OS on a smartphone to fit the larger proportions of a tablet wasn’t such a bright idea? Well, we’re told that Android 3.0 Honeycomb is supposed to fix that with all sorts of tablet-friendly features. So, what are those features?

For the user, the Honeycomb UI will now include a system bar with global status and notifications, an action bar for application control, a redesigned keyboard (including the addition of a tab key), and updated standard apps.You’ll notice that the camera app, for example, gets loaded with way more options for quick access to exposure, focus, flash, zoom, and so on. In short, the OS is, well, more tablet-friendly.

For devs, there are redesigned UI widgets, expanded home screen widgets, drag and drop, high performance 2D/3D graphics, and support for HTTP Live streaming. Considering that so many companies are coming out with Honeycomb tablets this year, it could represent the beginning of a huge boon for Android tabs. Android is now the top-selling smartphone OS in the world; are tablets soon to follow?