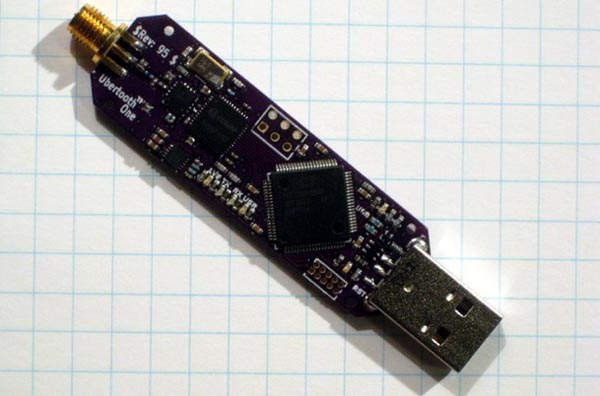 WiFi sniffers are a dime a dozen, allowing hackers and “troubleshooters” monitor wireless networks with ease. However, there appears to be a shortage of affordable Bluetooth sniffers. Michael Ossmann wants to change that.

He has started up a new project on Kickstarter for an open source Bluetooth network sniffer called the Ubertooth One. It plugs into your PC’s USB port, runs on an ARM Cortex M3 processor-based board, and offers an antenna out the other end. The idea, then, is that you can monitor Bluetooth signals.

While in the so-called “promiscuous” mode, you can actually use the radio to pick up everything that is passing through the wireless waves; remember that Bluetooth normally only pays attention to stuff addressed to it, ignoring everything else. With Ubertooth One, you can theoretically nab data packets being sent between two nearby phones or other Bluetooth devices.

Yes, this opens up a huge can of worms for Bluetooth-based hacking, but it can also be used to, um, “test network security.” Remember that the WiFi equivalents have been used for cracking network passwords. In any case, you can head over to Kickstarter to show Ossmann your support. You should also check out our own Kickstarter project and pledge today!