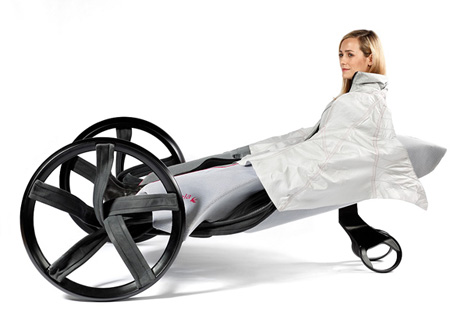 BMW asked students at the European Institute of Design in Barcelona to come up with some wearable alternatives to cars that can be used to zoom around European city centres.

One of the highlights includes “Svala,” a white dress that looks like a mix between a hospital gurney, a wheelbarrow and a Snuggie. The dress activates when you put it on and wheels you around the city. You can even charge the contraption as long as you store it vertically, exposing the solar panels. The dress will be on display in the centre of Barcelona until the end of the month.

Even better, there’s a “City Skiing” suit that lets you “ski” through the city’s pedestrian areas using nano-wheels. The ski-suit comes equipped with brake lights, turn signals and a GPS system. Because you can never look too ridiculous when strutting your stuff in Milan.

For all you Segway fans, the “Flymag” (or is it Flagway?) is worn like a cardigan and works like a Segway: the movement of your body makes it go faster or slower and left or right. The whole thing can be wrapped up and carried like a backpack.

All the wearable transporation is electric and solar-powered. I think I’ll stick with my rollerblades; they don’t require any energy at all. And I don’t have to wear a giant white dress to get them to work.