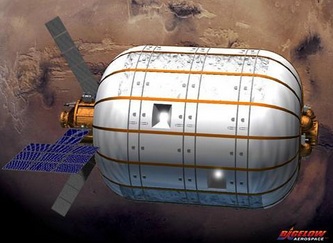 Inflatable furniture may have gone out of style after the 70s, but NASA isn’t looking to Boeing or Bechtel to build an addition to the International Space Station; they’re looking to Bigelow Aerospace to design and manufacture a 330 cubic metre inflatable expansion for the station to house an extra six people, a method they say would be more cost-effective.

The solar-powered BA330, presumably the most imagination-lacking name possible for the module, would be built of a non-rigid aluminum shell capable of withstanding impact from external objects and aiding in radiation shielding. Once the designs are finished and approved, the Bigelow Aerospace 330 cubic-metre addition could be ready for orbit within two years.

The company has sent three inflatable prototypes to space in the past, and have been refining their designs since 2006.