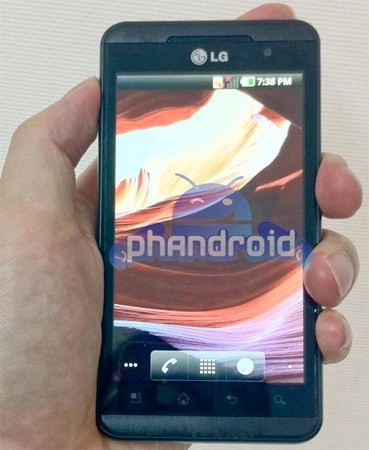 It looks like the Nintendo 3DS has started a craze toward glasses-free 3D. Or at least it has added substantially to it. Following in those eye-popping footsteps is the LG Optimus 3D, which is set to be unveiled at Mobile World Congress 2011 later this month.

LG is touting the device as the world’s first full 3D smartphone. This not includes the glasses-free 3D display, which will presumably use similar stereoscopic tech as the 3DS, but also a dual-lens camera in the back for taking 3D pictures (and probably videos too).

The leaked photo shown here, which comes to us by way of Phandroid, isn’t really confirmed, but it’s a reasonable assumption for what the final product will look like.

I’m still not really sold on this whole 3D thing just yet and I imagine the 3D creation with the Optimus 3D won’t be as good as Avatar (just like how most cameraphones aren’t as good as “real” cameras”), but this is a bold leap. Life’s good? We’ll find out soon enough. So much for the Optimus 2X and Optimus Black, eh?