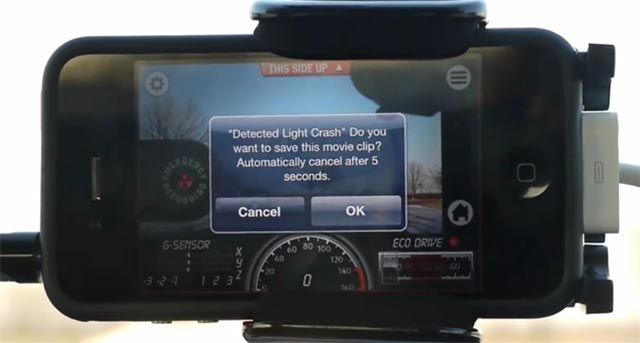 Great. Some idiot decided to come flying out of a four-way stop, crushing the front corner of your shiny new Honda CR-Z. You’re not hurt, but the insurance people are going to try and peg 50% of the fault on you… but it’s not your fault. And you have proof.

At least that’s the scenario being offered by a new 99 cent app for the iPhone. The suitably named iCar Black Box is exactly that: a black box for your car. You mount your iPhone on the windshield and boot up the app. When it detects you’ve been in a fender bender (thanks to the accelerometer), it’ll ask if you want to save the video of what happened.

“But a video after the fact isn’t going to help.” You’re right. That’s what makes this interesting: it retroactively records the video. This means that moments after the crash, it’ll save the preceding segment of video; it’s been recording this whole time, but it won’t save hours of footage of your mindless flat-and-straight highway driving.

The video footage is coupled with GPS information, including not only your location, but also your speed. I’m not completely convinced that this app works perfectly, but whatever ammo you can bring into the insurance fight (or anything else, for that matter), the better.