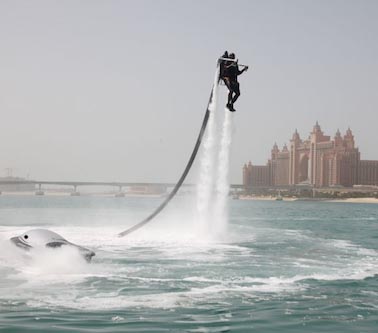 To the excitement of tourists and gimmick-lovers everywhere, the Jetlev-Flyer water-powered jetpack will be hitting beach resorts the world over this March. Personally, I wish somebody would have told me to brace myself for disappointment before I watched the prototype video.

As a kid, the idea of a jetpack was nothing short of the coolest thing people could ever possibly create. And the idea was simple enough: Strap some firepower to your back and fly anywhere.

But my mental image of the jetpack has taken a bit of a beating lately, and the Jetlev is doing nothing to reverse that trend.

First off, firepower seems to be passé. It started with the Solo Trek XFV in 2000, a jetpack that used wind turbines rather than spitting streams of fire. Fine, NASA’s on board. It can’t be that bad. At least it’s a start.

Somewhere along the line, though, someone got the idea that jetpacks should be powered by water. Enter Super Mario Sunshine in 2002, a video game where Mario trades his dinosaur for a water-powered jetpack. It’s iffy, but it’s self-contained, gets him around and serves its purpose of cleaning up the island.

Then that “Kick Ass” movie a year or two ago. I don’t think a real, fuel-burning jetpack has ever looked lamer than with that nerdy kid flying it while wearing a scuba suit. And the water theme continues.

Now, the Jetlev has taken the worst aspects of all of these upsetting jetpack wannabes and made them tourist-friendly. It’s tethered to a modified jetski by an oversized garden hose that only allows riders to hover at 30 feet above the water.

The jetski pumps water up the hose and through the downward-facing nozzles behind the rider’s shoulders, giving lift and forward momentum up to 22 mph. But there is not a single practical application of this $99,500 embarrassment aside from letting drunken college students parasail in front of the boat rather than behind it. You can’t even use it to clean up the island since doing so would run the jetski dry and cut your “fuel supply.”

In reality, this is nothing more than a glorified fire hose that’s been robbed of its life-saving purpose. For shame.