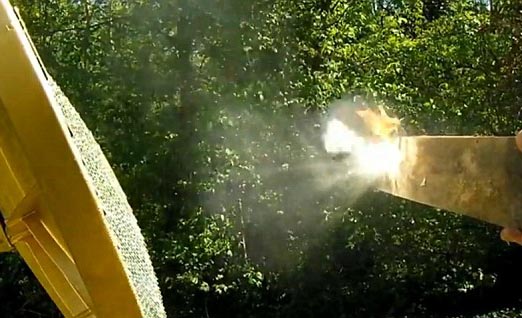 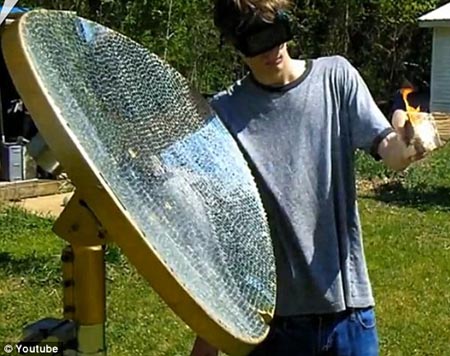 It seems awesome things can happen in the world when a 19-year-old decides to get off the couch and make something more than a sandwich. Something that requires a workman’s patience, good planning and downright inspiring ingenuity.

And that’s exactly what Indiana resident Eric Jacqmain decided to do with $90 worth of parts, including a fibreglass satellite dish, wagon parts and 5,800 mirror tiles. The result is somewhat of an environmentally-friendly inverted disco ball of doom, designed to focus the sun’s rays to a single point capable of almost instantly vaporising metal, turning mud to magma and bursting logs into flames.

“Reflected sunlight from all 5,800 mirrors collects into a 1 cm spot with a brightness of over 5000 suns,” Jacqmain wrote in the death ray’s demo video on YouTube before slipping on protective goggles and holding up everything in arm’s reach to a fiery demise.

It may have been karma that led to the satellite’s own fiery demise in an unfortunate shed fire; Jacqmain says it was probably “suicide.” Either way, the end of the R5800 death ray in December has only paved the way for better things, as Jacqmain is working on replacing his awe-inspiring invention with a second solar death ray. Only this time, much bigger and with a total of 32,000 mirrors.

One has to wonder just what practical applications such a powerful invention could be used for. Aside from entertainment, of course.