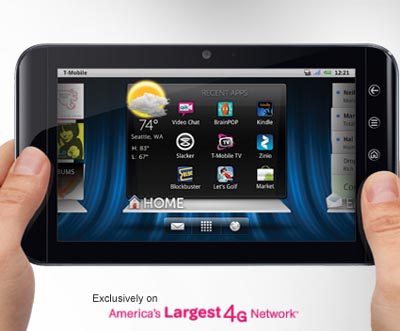 Even if we cast aside all the marketing speak in regards to what “4G” really means, the Dell Streak 7 is already pretty exciting for T-Mobile. Old Magenta has formally announced that the seven-inch slate will hit shelves this week for just $199.99. That’s assuming, of course, that you want one of those two-year contracts. And deal with a $50 mail-in rebate.

As a suitable alternative to something like the Galaxy Tab, the Streak 7 boasts 4G connectivity via the T-Mobile HSPA+ network. That goes along with the seven-inch screen, Android 2.2 (hopefully with a Honeycomb update in the works?), and NVIDIA Tegra2 running the show. Naturally, they’re boasting that whole Flash support thing to differentiate the Streak 7 from a certain iTablet.

There’s also those front-facing camera for Qik video chatting, along with the rear camera for snapping pics. I don’t know how well these Android tablets are going to compete against the iPad 2, but it’s good to see that we’re starting to see more options. Android dominates smartphones and tablets are quickly becoming the next frontier.

Oh, and if you’re not one for contracts, the Dell Streak 7 is being sold for $450 sans agreement. Considering what you get, that doesn’t sound like too shabby a deal.