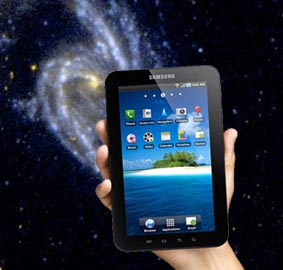 We all know that Samsung has been able to enjoy a fair bit of success with its Galaxy S line of Android smartphones, but we didn’t know that it was of record-breaking proportions. Well, the Korean giant is on cloud nine.

The financials have just come out for Q4 2010 and it seems that Samsung has busted several of its previous fiscal records. It has the most total revenue ($139 billion), most net income ($14 billion), and most operating profit ($15.5 billion). Pretty soon they’ll want a Scrooge McDuck-style money bin!

Not surpringsly, the smartphone arena contributed a great deal to this success. They sold over 80 million mobile devices, as well as two million Galaxy Tabs. The nearly 13 million flat panel TVs shipped certainly help too.

Years ago, Japan was the be-all and end-all when it came to primetime electronics (and reliable cars). That’s changing. South Korea is a force to be reckoned with, given the drastic improvements at Hyundai and Korea, as well as the huge growth enjoyed by Samsung. Competition. It’s good. Let’s just hope that Samsung does a little better with pushing out those Android updates in 2011, ‘kay?

The fourth quarter results brought Samsung’s full year 2010 revenue to an all-time high of 154.63 trillion won, up 13-percent from last year. Net income reached a record high of 16.15 trillion won, up 65 percent compared with the previous year, while operating profit was 17.30 trillion won, also a record.

“Despite the difficult business environment including reduced IT demand caused by the economic slowdown, we achieved record-high results both in terms of sales and operating profit in 2010,” said Robert Yi, Vice President and Head of Samsung Electronics’ Investor Relations Team. “However, considering overall business conditions, unlike 2010, we expect the traditional earnings pattern of a weak first half, with a strong second half to return in 2011.”

Samsung expected price competition to intensify in the consumer electronics, IT and mobile device markets in 2011, while major components prices are also forecast to decline. To offset pressures stemming from adverse market conditions, Samsung will focus on the cost competitiveness of its memory semiconductor portfolio, reducing marketing expenses and increasing shipments of high-end smartphones and tablet devices.

Samsung said the forecast continued appreciation of the Korean won during 2011 could have a negative impact on earnings, but the company’s diversified foreign exchange mix would limit the effect of movements in particular currencies.

In 2011, Capex is expected to reach 23 trillion won. As was announced in early January, 10.3 trillion won will be invested in the Semiconductor Business, including 5.8 trillion in memory and 4.2 in system LSI. A further 4.1 trillion won is allocated for the LCD Business, as well as 5.4 trillion won for subsidiary Samsung Mobile Display.

Despite a weakening market trend, Samsung secured profitability by increasing the portion of high-margin products such as server and mobile DRAM, as well as by strengthening its market position with increased production of 40nm-class processes and below.

While the global DRAM market suffered from falling prices and weakening PC DRAM demand, NAND chips did well with help from surging demand for smartphones and tablet PCs. Samsung’s market differentiation strategy in the NAND sector was to expand production of 30nm-class processes and below.

The DRAM market is forecast to improve in the second half of the year driven by growth in PC replacement demand from businesses. Samsung will continue to focus on energy-efficient green memory solutions for servers and enhancing technology leadership to maintain the profit margin of the Semiconductor Business.

LCD Looks to Second Half for Rebound

Overall unit sales for the period increased more than 10 percent quarter-on-quarter. While shipments for IT panels climbed supported by demand for tablet PCs, the fall in demand for TV panels was compounded by a buildup of inventory in the TV set market.

Samsung forecasted LCD panel prices will remain low in the first quarter of 2011 due to supply outpacing demand. However, the company anticipated incremental demand increases in the second half led by the economic recovery and inventory restocking by set makers. Samsung aims to drive market growth with a new line-up of entry-level LED panels and explore the high-potential market for tablet PC panels.

Driven by strong year-end demand for the company’s flagship smartphones, Samsung’s mobile device sales reached 80.7 million units for the quarter, up 17 percent year-on-year. This brought total sales for the year to 280 million units, registering growth of 23 percent and outperforming the overall market.

While mobile device sales are expected to contract slightly in the first quarter of 2011 due to weak seasonal demand, Samsung forecast high single-digit sales growth for the year overall, driven by the fast-expanding smartphone and tablet segments. Samsung announced it will introduce the successor to its Galaxy S smartphone during the first half of 2011, featuring a dual-core processor and Super AMOLED Plus display to further enrich user experience. With its growing lineup, the company is targeting smartphone sales of 60 million units for the year, double that of 2010. In the tablet market, Samsung will complement its Galaxy Tab with a range of devices to optimally meet various user needs.

Demand for LED TV to Get Stronger

Samsung’s Digital Media businesses, which encompass Visual Display, Digital Appliances, IT Solutions, and Digital Imaging, posted quarterly revenues of 15.97 trillion won for the October to December period, up 3 percent year-on-year. The businesses registered a loss of 0.17 trillion won despite improved performance in TV and IT products. For the full year 2010, the Digital Media businesses’ combined revenue totaled 57.26 trillion, up 12 percent from 2009, with an operating profit of 0.49 trillion won.

Samsung shipped 12.72 million flat panel TVs in the fourth quarter, a 40 percent jump compared with the previous quarter and a 17 percent on-year increase. LED TVs sales grew strongly during the fourth quarter as consumers in developed markets continued to adopt this new technology. Market demand for LED TVs is forecast to rise further, with the portion of LED models in the overall LCD segment expected to reach 51 percent this year.

In 2011, market demand for flat panel TVs is forecast to increase 11 percent, helped by strong emerging market sales. To enhance profitability, Samsung aims to increase sales of premium products such as LED, 3D and Smart TVs. It will also market region-specific models along with low-cost models in emerging markets.

In order to allow more consumers to enjoy 3D TV, Samsung will expand its 3D TV line-up beyond the premium segment, while offering improved picture quality and 3D glasses technology. Samsung’s Smart TVs will get smarter this year by adding various new video and search features, and expanding its portfolio of TV apps from the current 400 to 1,000 by the end of 2011.

Sales revenue of the Digital Appliances Business climbed 16 percent year-on-year due to robust sales in developed markets and some emerging markets, such as Russia. Sales are expected to continue to expand in 2011 with the launch of differentiated products, while the business will expand and improve its overseas operations.