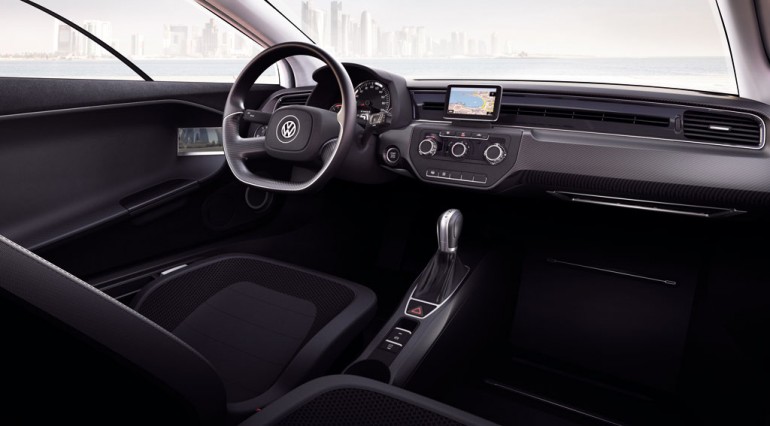 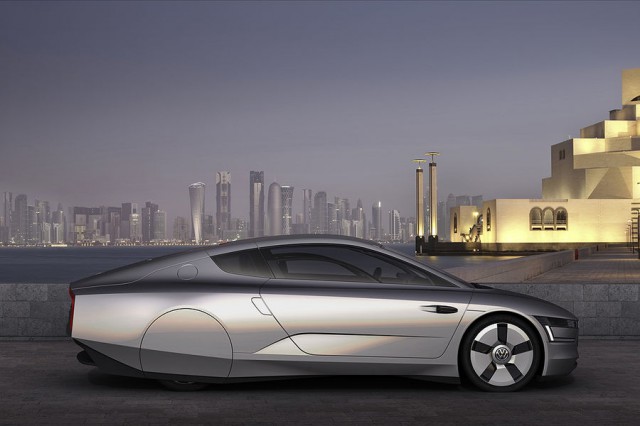 Nearly a decade after the Volkswagen set out to achieve the 1L/100km car capable of mass production, they’ve done it. The XL1, with a body inspired by the aerodynamic qualities of the dolphin, is on display at Qatar’s auto show.

The plug-in hybrid’s 2009 predecessor, the L1, was unveiled in 2009 with tandem seating and an efficiency of only 1.38L/100km, but this was still a step away from Volkswagen’s goal of a production car and came out to 65 mpg short. These issues have been resolved with the XL1. Every non-aerodynamic feature of a car has been removed: It has no rearview mirrors, but instead cameras that relay information to a pair of screens on the dashboard. The real wheels have been capped and surrounded by side-spoilers in front and behind to lessen drag. The radiator grill has been removed, with air intake achieved through monitored pumps.

The regular steel body has taken one from Formula 1, bringing the weight down to 1753 lbs by replacing steel sheet with carbon fiber reinforced polymer. Thanks to “advanced resin transfer moulding,” a patented new production system that’s led to significant cost reductions, limited runs of the vehicle are viable.

The vehicle’s plug-in hybrid system consists of one two-cylinder TDI engine (35 kW/48 PS) and an E-motor (20 kW/27 PS), with a 7-speed dual clutch transmission (DSG) and lithium ion battery. The hybrid engine is housed between the seats and the 100-litre trunk overtop of the back axel, resulting in direct rear-wheel drive. Volkswagen say the transition between the electric and TDI engines is very smooth thanks to the dual clutch and pulse starting.

The car is capable of accelerating from 0-100 km/h in just 11.9 seconds thanks to 120 Nm of torque using the TDI engine and the E-motor as a booster, with an electronically limited top speed of 160 (100 mph). Though these aren’t breakneck sports car specs, they’re absolutely more than adequate.

Add to this the sleek style and forward-angled wing doors and slit LED head- and taillights, and the XL1 is as sexy as it is potent.

The Volkswagen XL1 is on display at the Qatar Motor Show from January 26 to 29, but you might have to wait a fair bit to get your hands on one. When Volkswagen unveiled the L1 in 2009 they announced the car would be in production by 2013, but with this update, that could easily change.