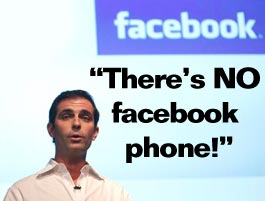 First, Facebook said they are not going to make a smartphone. Then, rumors spill that HTC is making a Facebook phone. Now, Facebook is once again saying that it’s not making a phone. So, who are we supposed to believe huh?

The latest reports come by way of Dan Rose, head of business development at Facebook. He is outright denying that the popular social network is partnering on HTC to produce any kind of mobile device, saying that such a phone is “just another example of a manufacturer who has taken our public APIs and integrated them into their device in an interesting way.”

Note that Rose isn’t denying the existing of an HTC-made “Facebook” phone, per se. He’s just denying that Facebook is any way directly related to the project. In this way, we could still very much see two “Facebook phones” at MWC next month; they just won’t be Facebook-branded, as though anyone would care not to have a big blue F on their handset.

So many smartphone platforms come with heavy Facebook integration, including the syncing of calendars and contacts, so it doesn’t matter how official this “Facebook” branding is; so long as it works.