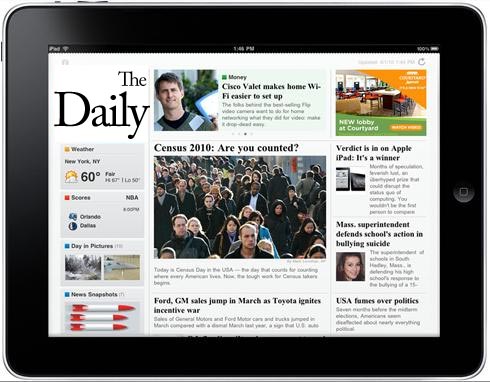 Traditional print newspapers all around the world are struggling to make ends meet, so what do you do? You take a look at the latest trends and you try to capitalize on them. After much hullabaloo, The Daily iPad-only newspaper from News Corporation will finally go live as of next Wednesday.

Remember that News Corporation was founded by Rupert Murdoch and it’s the same vehicle that drives the rhetoric at Fox News, the much aligned network that is oftentimes the brunt of the jokes on The Daily Show and The Colbert Report. Far be it for me to call myself a political pundit, but there you go.

In any case, it sounds like Apple VP of Internet Services Eddy Cue will be on hand for an event at the Guggenheim Museum in New York for the announcement. After all, Steve Jobs is still at home, slurping down some chicken noodle soup and trying to feel better. (The world misses your “one more thing” and black turtlenecks already!) Word on the web calls for iTunes-fueled subscription billing at 99 cents a week.

What do you think? Do you still pay for the news or are you perfectly satisfied with reading the overflowing onslaught of material freely available on the web?