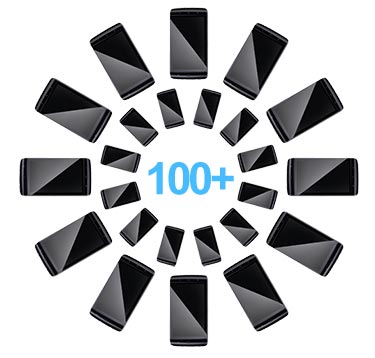 We knew that this year’s Consumer Electronics Show in Las Vegas was going to represent the year of the tablet. We knew that just about everyone was jumping on board this newfound goldmine, but we had no idea how big this would become. How big? Well, there were over 100 new tablets revealed at CES 2011.

Most of these are going to fly under the radar, coming from companies like Augen, Enspert, and Rullingnet, but a good number come from more notable names. The marketplace is about to really get flooded with so many iPad alternatives that you won’t know what hit you.

It’s not like they’re all going after the same kind of size as the Apple variant either, as sizes ranged from a pocket-friendly four inches to a notebook-worthy dual 14-incher. Granted, the four-inch Panasonic VIERA tablet was just a prototype, but it’s probably more suited as a smartphone-like device than anything else.

A quick rundown of some highlights include the Asus Eee Pad Transformer, Samsung Galaxy Tab 4G, Sharp Galapagos, BlackBerry PlayBook, Dell Streak 7, Kno dual-screen, and the $800 Motorola XOOM. If nothing else, this proves we’ll have no shortage of choices if we want to veer away from Cupertino.

This list is only partially complete (76 tablets), right now it’s work in progress and we can expect it to keep growing to Shawn Dubravac.

Here’s a few notable tablets we reported on during CES;