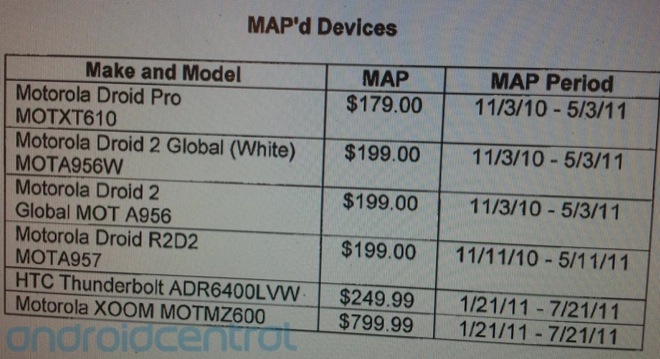 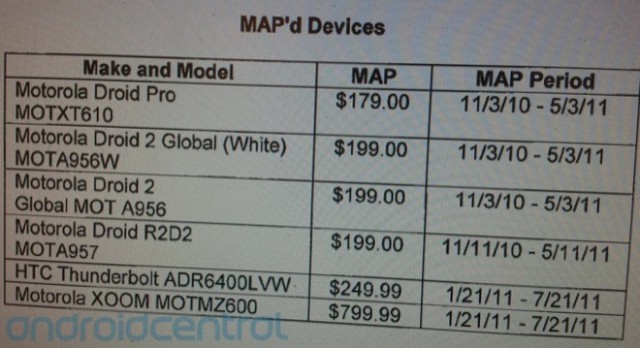 If you were hoping that Motorola’s Honeycomb-powered tablet would be able to undercut the pricing of the iEquivalent, you’re going to be sorely disappointed. A leaked Verizon memo seems to indicate that the minimum advertised price (MAP) for the XOOM tablet is a cool $799.

The equivalent 32GB Apple iPad would fetch $729, making the Android-fueled option more expensive. Matters are made even worse when most people think of the iPad as a $500 device (which is the starting price). If the XOOM starts at $800, it’s going to sound undoubtably doubly expensive.

The $800 MAP is apparently in place between now and the middle of July, so retail stores won’t have much wiggle room with how much they can advertise the new tablet for. They can, however, sell it for much less. You see this all the time on Amazon, for example.

Remember that there’s nothing stopping Verizon from throwing in a monstrous carrier subsidy when you sign up for a data contract with them too, so it could theoretically bring the XOOM down to a more standard $200-$400 with contract kind of price point. You’ll also see the HTC ThunderBolt LTE at $249.

Then again, the iPad 2 will likely be out by that time and it’ll be the shiny new toy in town.