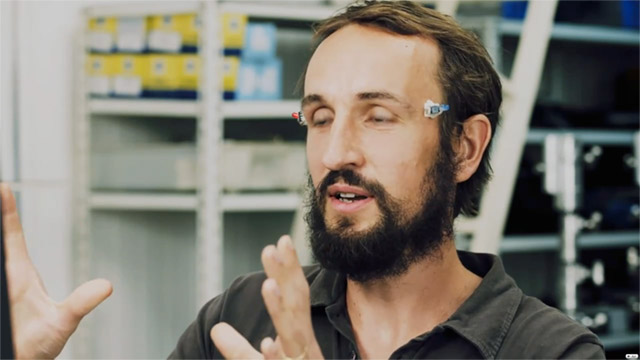 One of the big drawbacks surrounding 3DTVs are the active shutter glasses that must be worn for 3D viewing, running up to $200 per pair. A glasses-free 3DTV technology has begun circulating the internet in a video hosted at JonathanPost.com, who we don’t know much about. The experiment was Conducted by Luis Carone and managed by Daniel Dias, in it is French director François Vogel.

In the video, Vogel attaches electrodes to his head, one on each temple, and then synchs each electrode with a remote control. Once he starts the program his eyelids blink constantly until he shuts off the system. It appears that the electrodes on Vogel’s head replace the function of active shutter glasses by simulating a similar effect.

The way 3D works is the brain combines two separate images, one meant to be seen by the right eye and one to be seen by the left eye.  Active shutter glasses sync with the TV (120Hz in this case) and darken the eye that is not meant to see the image. According to Jean-Marie Hanssens, an optometrist who teaches at the University of Montréal, this happens about 64 times per second. After viewing Post’s video, Hanssens informed us that it is possible.  “I think this could be possible because electrodes can make eyelids blink but I don’t think that the frequency is fast enough to get the same quality as active shutter glasses.” Hanssens said our eye muscles wouldn’t be up for it. “Blinking as fast as in the web video can generate various eye problems such as dry eye, corneal and lid irritations, lid spasms,” Hanssens said.

In his research, Hanssens uses 3D to test binocular vision. He also studies the impact of 3D vision on posture and subjective discomfort by using 3D glasses and a Full Immersive Virtual Environment, a big room where the walls and ground are the screens. Hanssens said that 3D movies are not harmful to our eyes, but some short-term effects can include headaches, visual fatigue, nausea, dizziness and blurred vision. The effects can last a few hours, but so far researchers haven’t found any long-term effects.

Nintendo is releasing their glasses-free 3DS on March 27th. Nintendo released a warning that children under six shouldn’t play the 3DS in 3D mode, and it will have a parental control that can lock the device in 2D mode. According to Nintendo, the 3D could have a potential impact on the growth of children’s eyes.

However, the American Optometric Association suggests that 3D viewing may help uncover subtle eye disorders that if left uncorrected, can lead to learning difficulties. 3D viewing requires coordinated eye muscles that maintain alignment of both eyes, and the brain must be able to focus where the eyes are aimed. Slight problems with these skills can lead to an inability to view 3D, but can also affect reading comprehension.

“In real life, eyes are adjusting their focus to different objects depending on the distance, this is called accommodation,” Hanssens said. “In 3D screens, objects appear on the same plane (the screen) which can disturb the relation between accomodation and fusion of right and left images. People who have a lazy eye due to different conditions may not have stereovision.”

So while there is no medical evidence that 3D can damage eyes, it could work to uncover eye issues that haven’t presented themselves yet. Hanssens said that people with these issues are unable to view 3D properly, but see it as a 2D movie with fewer contrasts. Hanssens recommends these people, especially kids, should consult an optometrist and get an eye exam. But Hanssens cautions that 3D shouldn’t be used as a screening tool.

“The problem is that a child who never experiences 3D vision in his life will not be aware that he is not able to see 3D effects,” Hanssens said. “He will only report that ‘a 3D movie is not a big deal.’”

Toshiba displayed glasses-free 3D TVs at CES 2011. Toshiba’s 3D TV is built with a thin sheet of small lenses in front of the display, which splits light from the screen and sends it to nine points in front of the TV. Viewers will have to sit in the exact spot of one of these nine areas to be able to experience the 3D.  Toshiba claims the TVs will be available in North America by April.

As for Post’s prototype, we have yet to see if it’s a hoax or not. Jonathan Post did not respond for comment.