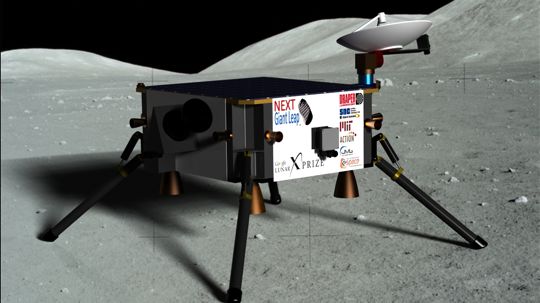 Mankind’s next giant leap will be a mission of data-gathering.

Next Giant Leap, a Boulder, Colorado company building interplanetary lander/hopper robots, received a $1 million grant from the Charles Start Draper Laboratory to further their technology with the hopes of winning Google’s $30 million Lunar X Prize in 2012.

“We’re developing critical technology for landing and hopping, both to satisfy the rules for the Google Lunar X Prize, and to provide an innovative, regional-scale science measurement capability,” said Seamus Tuohy, a team leader with Next Giant Leap and the director of space systems with Draper Laboratory.

“Unlike rovers that go to a single point on the surface of a planet, and then maybe two kilometers away and back, retreating if something is in the way, these would land, then ascend a bit, do a translation, traverse above the terrain to land in another spot.”

But the hoppers aren’t limited to moon expeditions, says Tuohy. Their technology could also be used to place sensors or gather data from difficult-to-access locations on Earth.

“I believe this would be particularly valuable to the environmental cause,” he says. “The future ability to monitor the environment is a government concern, but who’s to say the best technology and services to measure greenhouse gases, and other things might not come from a commercial enterprise like Next Giant Leap?”

Competitions such as Google’s Lunar X Prize may help to inspire advancements in other areas of research and development, too, says NGL team member Todd J. Mosher, who also works as a program manager at Sierra Nevada Corporation.

“The competition is driving people to get together and figure things out,” says Mosher. “We may not solve this problem in our first mission, but we’re thinking about how to survive a lunar night, which is equivalent to 14 days on earth in darkness, if our vehicles and stations run on solar. If we develop something rugged and robust enough to work in that extreme environment, it will help us back here on earth.”