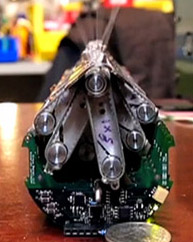 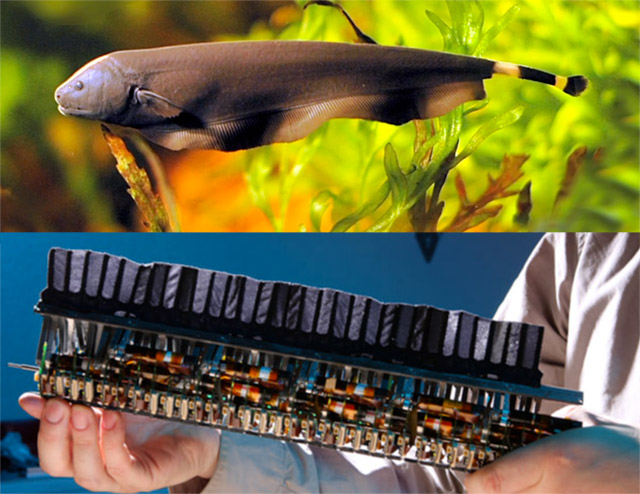 Researchers at Northwestern’s McCormick School of Engineering and Applied Science have made a robotic fish that can swim in all directions. The robot, nicknamed Ghostbot, was inspired by the Black Ghost Knifefish that lives in the Amazon basin; a nocturnal fish that has poor eyesight and relies on a weak electric field to hunt for food. It can move both vertically and horizontally using either one or two waves alongside its single long fin.

Professor Malcolm MacIver heads the team that works with Kinea Design for building the waterproof Ghostbot, they hope the Ghostbot could be used to study coral reefs and help in rescue operations. It  could also be used to develop agile underwater vehicles, which would be sent to fix oil spills.  The robot has 32 artificial fin rays powered by 32 motors, giving independent control of the fins. The robot took seven months to develop and cost $200,000.

The Science Museum in London has had a robotic fish swimming in their tanks since 2005. The fishbot, which resembles a carp, was produced by researchers from the University of Essex. They are working on a way to get the fishbot to monitor ocean pollution, instead of sending human divers down to collect samples.

Researchers at Northwestern University have created a robotic fish that can move from swimming forward and backward to swimming vertically almost instantaneously by using a sophisticated, ribbon-like fin.

The robot — created after observing and creating computer simulations of the black ghost knifefish — could pave the way for nimble robots that could perform underwater recovery operations or long-term monitoring of coral reefs.

Led by Malcolm MacIver, associate professor of mechanical and biomedical engineering at Northwestern’s McCormick School of Engineering and Applied Science, the team’s results are published in the Journal of the Royal Society Interface.

The black ghost knifefish, which works at night in rivers of the Amazon basin, hunts for prey using a weak electric field around its entire body and moves both forward and backward using a ribbon-like fin on the underside of its body.

MacIver, a robotics expert who served as a scientific consultant for “Tron: Legacy” and is science advisor for the television series “Caprica,” has studied the knifefish for years. Working with Neelesh Patankar, associate professor of mechanical engineering and co-author of the paper, he has created mechanical models of the fish in hopes of better understanding how the nervous system sends messages throughout the body to make it move.

Planning for the robot — called GhostBot — began when graduate student Oscar Curet, a co-author of the paper, observed a knifefish suddenly moving vertically in a tank in MacIver’s lab.

“We had only tracked it horizontally before,” said MacIver, a recent recipient of the prestigious Presidential Early Career Award for Scientists and Engineers. “We thought, ‘How could it be doing this?'”

Further observations revealed that while the fish only uses one traveling wave along the fin during horizontal motion (forward or backward depending on the direction on the wave), while moving vertically it uses two waves. One of these moves from head to tail, and the other moves tail to head. The two waves collide and stop at the center of the fin.

The team then created a computer simulation that showed that when these “inward counterpropagating waves” are generated by the fin, horizontal thrust is canceled and the fluid motion generated by the two waves is funneled into a downward jet from the center of the fin, pushing the body up. The flow structure looks like a mushroom cloud with an inverted jet.

“It’s interesting because you’re getting force coming off the animal in a completely unexpected direction that allows it to do acrobatics that, given its lifestyle of hunting and maneuvering among tree roots, makes a huge amount of sense,” MacIver said.

The group then hired Kinea Design, a design firm founded by Northwestern faculty that specializes in human interactive mechatronics, and worked closely with its co-founder, Michael Peshkin, professor of mechanical engineering, to design and build a robot. The company fashioned a forearm-length waterproof robot with 32 motors giving independent control of the 32 artificial fin rays of the lycra-covered artificial fin. (That means the robot has 32 degrees of freedom. In comparison, industrial robot arms typically have less than 10.) Seven months and $200,000 later, the GhostBot came to life.

The group took the robot to Harvard University to test it in a flow tunnel in the lab of George V. Lauder, professor of ichthyology and co-author of the paper. The team measured the flow around the robotic fish by placing reflective particles in the water, then shining a laser sheet into the water. That allowed them to track the flow of the water by watching the particles, and the test showed the water flowing around the biomimetic robot just as computer simulations predicted it would.

“It worked perfectly the first time,” MacIver said. “We high-fived. We had the robot in the real world being pushed by real forces.”

The robot is also outfitted with an electrosensory system that works similar to the knifefish’s, and MacIver and his team hope to next improve the robot so it can autonomously use its sensory signals to detect an object and then use its mechanical system to position itself near the object.

While the applied work on the robot moves ahead in the lab, the group is pursuing basic science questions as well. “The robot is a tool for uncovering the extremely complicated story of how to coordinate movement in animals,” MacIver said. “By simulating and then performing the motions of the fish, we’re getting insight into the mechanical basis of the remarkable agility of a very acrobatic, non-visual fish. The next step is to take the sensory work and unite the two.”