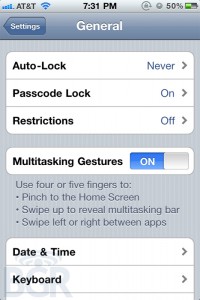 We caught wind of some of the new features in iOS 4.3 last week, but now we’ve got a video demonstrating some of these said features. Yes, it’s definitely a beta build, but this vid gives you a pretty good idea of what to expect.

For example, you might remember hearing about a four finger swipe on the iPad to switch between apps. This gesture might not seem so bad on the bigger screen of the Apple tablet, but it almost looks goofy on the smaller screen of the iPhone, don’t you think? Your four fingers barely fit on that display!

The beta build might be a little buggy, but it looks like the four finger swipe doesn’t work perfectly all the time either. Swiping right-to-left seems to work better than left-to-right, but that could be attributed to user error in the video. Also in clip, you can check out the swap from using the switch for toggling rotation lock and mute.

What was once meant to be the “easy to understand” smartphone for the masses just might be getting even more complicated. Maybe these advanced gestures should be reserved for tech geeks like us. 😉