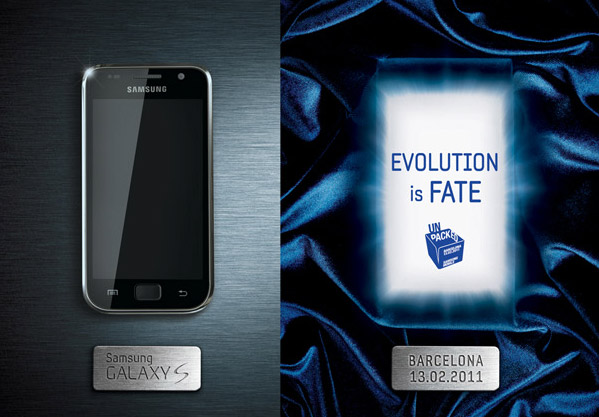 Samsung’s latest string of teasers leading up to the Mobile World Congress 2011 is the Evolution is Fate campaign, promising a Galaxy S2 on Android 2.3 Gingerbread that will inevitably take over for the first generation of their current best-selling superphone.

While nothing will be confirmed for certain until the MWC, the widely-expected specs will undoubtedly cause some sort of premature orgasm in hardcore Androidians. Hidden behind a 4.3″ 800 x 480 Super AMOLED Plus touchscreen, the Galaxy S2 will sport Samsung’s 1GHz Orion dual-core processor, the same processor expected to power the upcoming second-gen Galaxy Tab tablets. They’ve cut down the width almost a milimetre to 9mm, but still managed to pack in 1GB of RAM, an 8 Megapixel camera that will record video in 1080p Full HD, while the processor will be able to output Full HD via HDMI 1.3a with power to spare. Other features, such as GPS and NFC, will be carried over from the Galaxy S to this well-endowed successor.